Review of "Friday the 13th: The Final Chapter" by Jason Minton 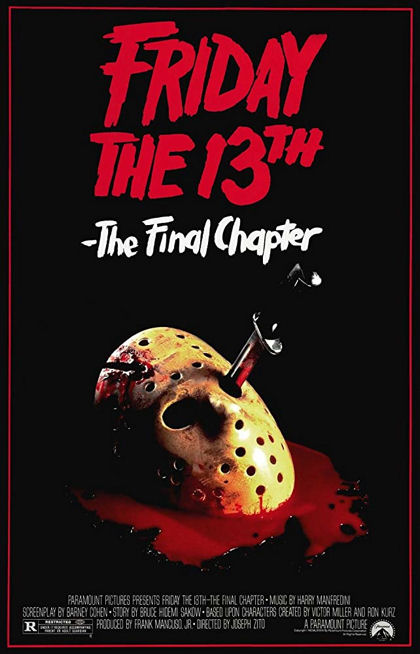 This Friday the 13th at Camp Crystal Lake ten are dead, seven kids, two bikers and the man who killed them all. The residence near Crystal Lake can rest easy now that the man responsible for the Crystal Lake Massacre is in the Wessex County Medical Center Morgue. With the area now safe but really never realizing anything was wrong, a group of teenagers head to the lake while someone else is headed home. Pronounced dead on the scene, Jason Voorhees is revived at the county morgue and he's coming back to Crystal Lake killing anyone he crosses paths with.

The Friday the 13th series is my favorite slasher franchise. While I know they aren’t all the best slasher movies, they hold a special place in my bloody heart. The fourth in the series is my personal favorite reaching the epitome of stereotypical 1980’s slasher movies. The Final Chapter is the first film in the series that can argue it created zombie Jason before killing him off for certain for his resurrection into the undead afterlife. But how does it measure up to the rest of the series? There are an appropriately numbered thirteen keys to Friday the 13th success. In no particular order…

1. A High Body Count: The Final Chapter has the perfect number of kills of any film in the franchise with thirteen not including Jason himself. While it was the largest body count of the series when the film was released it stays well below the insanely large number of throwaway deaths in the later films being just the right amount to matter, plus a hitchhiker.

2. Bad Acting: Outside of two of the best actors and the best protagonist of the entire series we still get some fine bad performances from several that die. There’s a wonderfully bad back and forth between the first two kills, Axel (Bruce Mahler) and Morgan (Lisa Freeman). Ted’s (Lawrence Monoson) performance is High on our list of the best bad acting in the film with the term "deadfuck" being so overused it gives us the giggles.

4. Kill Mom Music: The Final Chapter hits all the right notes evolving the music of the first three films and maximizing the art of loud music used for false scares.

5. Teens Dying as they Deserve: Thirteen victims, three adults including a nurse, a morgue attendant and a mom. The rest are teenage victims. The Final Chapter does it right introducing us to a cast of characters to die with only few surviving. The only character added blatantly for the body count is the Hitchhiker (Bonnie Hellman) who has the most non-erotic banana scene in the history of cinema.

6. Sex: Not everyone in The Final Chapter are deadfucks. Nurses get so turned on by exercise videos and the local news they’re willing to do it next to Jason’s dead body. Good luck surviving that. From a group of skinny dipping teenagers to suductive, naked, twin teenage girls, The Final Chapter fulfills doing what teenagers shouldn’t do in the shower if they want to survive a horror movie. I mean the house next to the Jarvis family does have a group of unsupervised, vacationing teens occupying it after all.

7. Boobs: In a Joe Bob Briggs form of counting boobies, we are treated to three pair of titty-tan-taculars the most in series history at the time. In addition to boobage we also see a lot of butt both guy and girl alike. In what may be the greatest nudity feat of any Friday film, twins Tina (Camilla More) and Terri (Carey More) take it off to go skinny dippy. The best Friday the 13th films have skinny dippy in Crystal Lake and in The Final Chapter we’re seeing double.

8. Stalking: The one flaw in comparison to the rest of the series is the lack of stalking scenes in the fourth film. The Final Chapter is more about the surprise attack than watching from Jason’s point of view. Child Tommy Jarvis does the majority of the stalking in this film peering through his window at his naked neighbor and sneaking peeks at skinny dipping teens.

9. Machete: The machete is in the wrong hands. Jason gets creative in this one killing via saw, scalpel, knife, spear, axe and even corkscrew but Rob (Erich Anderson), Trish (Kimberly Beck) and Tommy (Corey Feldman) wield the machete not Jason.

10. Eccentric Deaths: This movie isn’t all smushed banana’s. A meat clever to Crispin Glover’s head do you need more? Even a spear to the groin is outdone by simply tossing teens from windows to their death on the station wagon below. The king of all kills in The Final Chapter is the first one, decapitation by saw and a little twisting of the neck, classic. With appropriate karma Jason does die at the hands of his favorite weapon.

11. Even More Eccentric Body Reveals: Sadly with a house full of teenage victims next door Trish Jarvis finding the bodies doesn’t live up to its full glamorous, eccentric potential. There's no dead teens flying through windows in Jason's return home.

12. A Nemesis: For the first time in series history the main Voorhees adversary isn’t a teenage girl, it’s a child. I guess you can make an argument Trish Jarvis (Kimberly Beck) is the final girl but we all know Tommy steals the show. Corey Feldman’s Tommy Jarvis is the best incarnation of the character and the best adversary Jason Voorhees has every faced.

13. A Killer Voorhees: The first man to wear the zombie look for Jason Voorhies, isTed White. White brings the character back from the dead, bulky, dirty and with a bulging, deformed head.

So how does the first film tally up for a Friday the 13th movie? The body count is perfect with a large cast but only one character that’s completely gratuitously killed. Two of the series finest actors and characters come from fourth Friday the 13th film. Jason’s arch nemesis Tommy Jarvis, portrayed to his finest by a still young and talented Corey Feldman premiers in the Final Chapter. The series should have continued with Corey in the sequel. The most talented actor of the entire series, Crispin Glover is also in the fourth film. Yes, I know Kevin Bacon was in the original when I say that. Set where a Jason Voorhees film should be at Camp Crystal Lake, the music hits the mark with a nice age for the victims. The Final Chapter is just the right mix of comedy, scares, and kills. While there’ s still room for improvement for obvious reasons it’s my favorite film of the series.