Review of "Jallikattu” by The Headless Critic 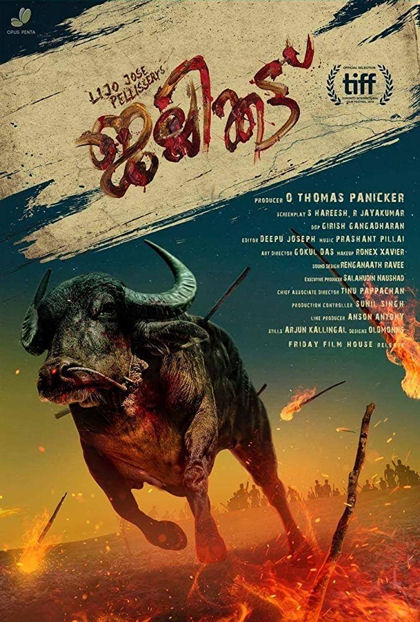 In an isolated village in India the residents live in harmony with their greatest concern of the day being planning today’s meal. In the isolated India village, today’s meal just got loose. A Buffalo is running wild, rampaging through the remote village. Before it tears their town apart killing anyone who crosses its path the villagers are running to catch it. The villagers are also running for their lives. The biggest threat the Buffalo brings into this small village however is disrupting the tranquility within. The battle of man against beast brings out the beast within man.

Jallikattu is a traditional practice that’s been going on for centuries in parts of India where a bull is released into a crowd of people who attempt to grab onto the hump on the bull’s back to stop it rampaging. Human rights and animal rights activists have long opposed the events even briefly getting them banned in 2014 pointing out that in the previous seven years alone thousands of people were injured with over forty humans being killed and at least four bulls dying. Jallikattu has since continued with the ban lasting less than three years. This film is a natural Jallikattu as the bull breaks free in a village. A warning to all who watch it, there does appear to be actual violence towards animals in the film.

A beast is unleashed in their village, the beast is unleashed in their hearts. In his seventh feature film Lijo Jose Pellissery directs a simple story with a realistic portrayal of the beast within man. He creates a modest paradise then destroys it from the ground up. Pellissery paints a tranquil picture of life in India with a steady beat of a repetitive, constant living and a unified melody within the town. He then unleashes a bull within the town uncovering the underlying frustrations within its residents leading to the death of more than today’s meal. It’s a beautiful excerpt of life in India with a statement to the controversial, brutal practices of heritage that still go on today.