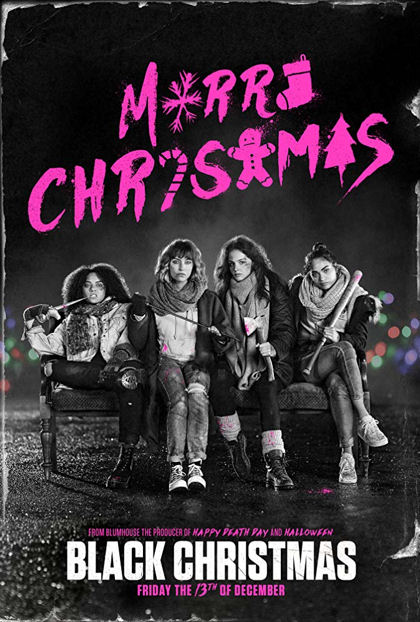 It’s Christmas break at Hawthorne College and the students on campus are slowly dwindling as they head home for the holidays. The sorority girls on campus are disappearing faster and not all of them are making it home. Receive a Yip Yap message from the long deceased school founder Calvin Hawthorne and you die. When this mysterious campus killer targets the sorority sisters of Mu Kappa Epsilon the next generation of women show them they’re not going to be a victim. It’s time to “slay girls”.

Junior feature film director Sophia Takal co-writes and directs the most self-aware sexist movie I’ve seen in some time. The 1974 Black Christmas preyed upon the fears of college kids and their parents that a crazy killer could take their life at any moment even someone hiding in your house. In 2019 Black Christmas makes a mockery of modern day social commentaries and turns rape into a Christmas song. The stereotypes are plentiful as well from your stereotypical rapey frat boys, after all "boys will be, you know..." to the fact yet another horror film casts a thirty year old lead actress to play a young student. Warning there are spoilers ahead…

A Black Christmas movie in title and holiday alone, the basis of the script of a ritualistic frat and the battle between sexes is better suited for a sequel to The Stepford Wives than it is an original slasher film. While we do get the most ridiculous death by icicle that is befitting a slasher, we’re also given a killer archer who prefers a bow and arrow to a traditional slashing. In the one remaining Black Christmas tradition and what may be the highlight of the film there is a bag over the head smothering death this time turning the tables from the victim who’s dying to the killer being the one who's bagged. We also get a nice little Christmas gift of a dead body being found in an upstairs chair much like the first death in the original film. In traditional slasher film form there are also as plenty of cutaway kills. When it comes time to die the killer takes his victims out quick with the exception of the lead actress who in traditional bad slasher film form, she gets special treatment and more time to escape the killer.

So much is wrong with this film I doubt I will cover it all. Besides being a completely sexiest satire it puts the name of a classic slasher movie on a supernatural mind control film that turns all men evil. Although most of them seem to have been evil already. This movie uses a dreidel as a weapon, triggers woman by telling them to “calm down”, calling them “hysterical” and telling them they can choose how they die after all it’s “their body, their choice”. Meanwhile men are given magical migraines while being controlled by the bust of school founder Calvin Hawthorne which began dripping magical black ooze when progressive girls got the former slave owner’s statue removed from school ground. “Before his death Hawthorne foresaw a day where women gained too much control.”

“Why does Santa Claus fear getting stuck down the chimney?” His biggest fear is probably that this incarnation of Black Christmas will be something he's forced to watch if he gets stuck. There are a lot of bad horror movies each year from inexperienced filmmakers or productions without a budget. The latest rendition of Black Christmas and its multi-million dollar budget still manages to become my least favorite film of 2019. This movie can “suck a fat fart”, a quote from the actual film.