Watching Movies - One Cut of the Dead

Review of "One Cut of the Dead” by The Headless Critic 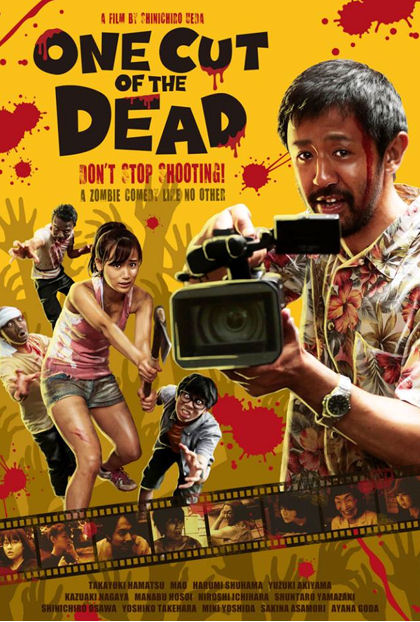 Chinatsu (Yuzuki Akiyama) is being attacked by a zombie Ko (Kazuaki Nagaya) but she isn’t dying the way her Director wants. A small cast and crew are filming a zombie movie at an isolated location that is rumored to have once been the place where the government actually tried to reincarnate the dead. When Director Higurashi (Takayuki Hamatsu) doesn’t get the realism he needs from his actors, he unleashes the undead on his cast and crew. Then our story begins…

Without giving anything away Shin'ichirô Ueda’s One Cut of the Dead is a one cut take of a zombie horror film. The first thirty minutes of the film are a slow, unprofessional exhibition of filmmaking with bad fake blood and even more unrealistic flying body parts. Stick around and you’ll understand why it is one of my favorite horror related films of the year. In the realm of one of my favorite forgotten comedies Noises Off, One Cut of the Dead brings imperfect perfection to the horror genre.

Takayuki Hamatsu gives an outstanding performance that’s seen even through a language barrier. He’s supported with multi-layered performances from a small cast primarily made up of Yuzuki Akiyama, Harumi Shuhama and Kazuaki Nagaya. My review is as vague as the beginning of the film. Trust that when you start One Cut of the Dead it does get better, then worse, then a whole lot better. Director Shin'ichirô Ueda crosses genre’s so abruptly it’s perhaps the greatest turn in horror I’ve seen since From Dusk Till Dawn over twenty years ago. Like the final crane shot that ends the show the cast and crew come together in perfect horror harmony.