Review of "In Fabric” by The Headless Critic 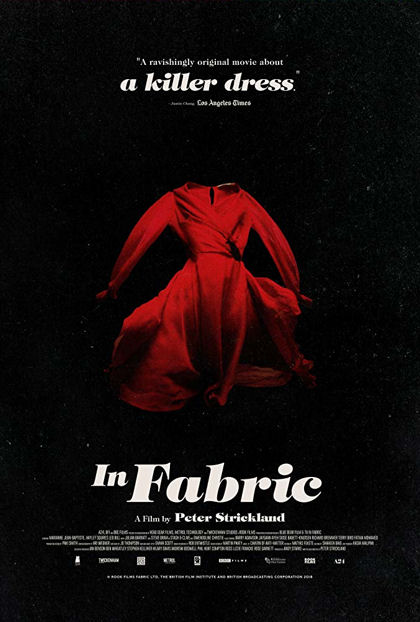 Like mass market advertisements, something was drawing her in. Recently single, middle-aged mother Sheila (Marianne Jean-Baptiste) has turned to lonely hearts advertisements to help her get back in the dating world. To prepare for her upcoming blind date the bank teller steps into an upscale department store with a very attentive saleswoman Miss Luckmore (Fatma Mohamed). Sheila spots a stunning, one of a kind, red dress that's sure to capture any future lover’s eye. A sixty percent off sale for such a dress is too good to pass up. It’s size 36 which isn’t her size at all but it’s a perfect fit.

Reg (Leo Bill) came home in a red dress, smelling of vomit after a stag night out partying with his mates. The one positive for his girlfriend Babs (Hayley Squires) is the dress he wore home fits her perfectly. A 36 isn’t her size and she has no idea how the dress fit both her and Reg but it looks nice on her. Reg and Babs are both showing the same rash. He isn’t worried but it has her thinking that maybe something is wrong in the fabric of the dress.

The latest feature from writer and director Peter Strickland is a retro psychedelic, giallo horror film starring some killer fabric. Two tales told of two families while only telling an excerpt of a fabrics life. If there is one era of cinema I hate it is the giallo horror of the 60’s and 70’s. Thankfully Strickland keeps the typical overacting found in these movies in check for this throwback film with Marianne Jean-Baptiste giving an excellent performance. He also has to deal with switching from the consuming character Jean-Baptiste creates for Sheila to the far less interesting marriage of Reg and Babs. While the subgenre of horror with its artistic for the sake of art shots and dreadfully repetitive soundtrack that try to tell the story through sound and visuals as much as dialogue and script isn’t made for me, it is an original version of inanimate killer object films that for me is somewhere closer to Quentin Dupieux’s Rubber than John Carpenter’s classic Christine.