Review of "The Perfection” by The Headless Critic 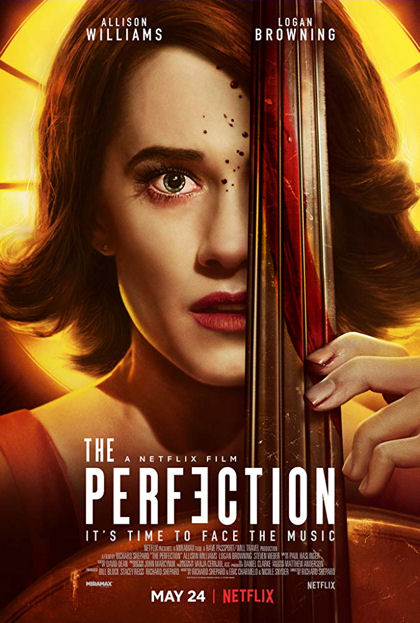 At one time Charlotte Willmore (Allison Williams) was the world’s most promising cellist. Over ten years ago she left the Bachoff Academy of Music and her career behind to care for her dying mother. She’s played for an audience of one for so long now she considers herself an amateur again. After the death of her mother a new musical prodigy Elizabeth Wells (Logan Browning) captures her ear and interest, drawing Charlotte out of her musical seclusion to Anton Bachoff (Steven Weber) and his academy back into the limelight. The two elite women find solace together forming a quick bond that very few could understand. There is resentment lying underneath the surface for both these women and their past desires to be the best will resurface in a violent outcome.

From a hitman to Hemingway “It's Time to Face the Music” for the unique perspective of an unconventional director of conventional films, Richard Shepard. Two promiscuous women, one with a known troubled past but who never stops smiling fail to endear the audience to either character. The predictable outcome of their quickly found relationship isn’t surprising but that is surprisingly only the first act. Shepard takes one of the oldest real life horror stories in the world and masks it in layers of the unknown. Enough back and fourths between victim and protagonist it’s hard as a viewer to begin to care. When the final evil is revealed the true nightmare of what’s happening is shown. One final twist in a story full or turns is one too many to care about.

An actor I never really cared for gives a surprise stand out performance in Wings alumni Steven Weber. Get Out breakout Allison Williams and her co-star Logan Browning also impress though their characters are largely ruined through no fault of the actresses due to plot twists in storytelling. While director Richard Shepard makes a good film his attempt to misdirect the narrative of the story does keep him from finding the perfection.