Review of "Bliss” by The Headless Critic 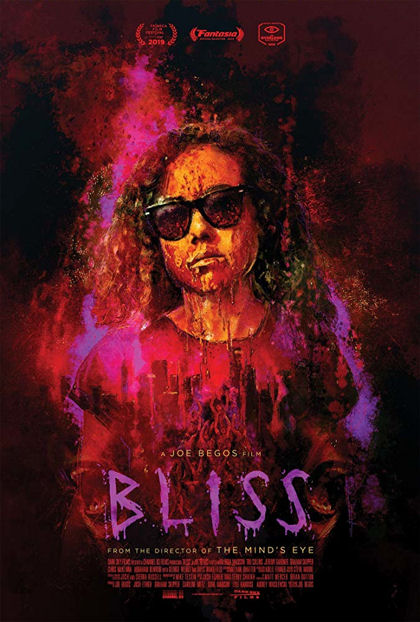 A creative block forces a brilliant painter to bliss. Creative painter Dezzy (Dora Madison) is overdue on her latest project. She hasn’t completed a painting in months. In order to inspire her creativity Dezzy visits her dealer for the first time in months as well. Instead of slipping easily back into the blissful world of bliss Dezzy buys Diablo, the strongest stuff. "Come on fuckers do you want to live forever?" After nights of partying until she blackouts Dezzy wakes in the mornings with her painting more complete than the night before and no memory of how it happened. She’s also waking covered in blood. Dezzy spirals into a life of sex, drugs and murder in order to complete her masterpiece but never expects the ultimate price she'll pay. It's become a desire she craves. She must have it and Bliss is only taking the edge off.

With a warning at the beginning of the film that it may trigger epilepsy, viewer discretion is advised. In his third feature film writer and director Joe Begos paints his actors red and the underbelly of Los Angles dark in this artistic, drug fueled hallucination with a twist. There are hints of scenes with amateur cinematography, one instance of sound issues and even though Dora Madison gives an excellent performance one scene that should have been reshot. These minor complaints actually work within the gritty style of filming that Begos intends in what is otherwise a professional movie. I absolutely love Begos’ eye for the underbelly of Los Angeles and got easily lost in the world.

The cast is great with veteran actors George Wendt and Abraham Benrubi taking sizeable roles. The Purge alumni Rhys Wakefield is barely recognizable in a nice supporting role for the underutilized, baby-faced actor. In what may be the biggest compliment for Begos, every role in the film is a character and he gets good performances from his cast all-around. Lead actress Dora Madison does steal the show exposing her acting soul as she paints the canvas red. Begos captures a drug fueled life and death in what’s a drug induced feeling while watching his film.