Review of "Kill Ben Lyk” by The Headless Critic 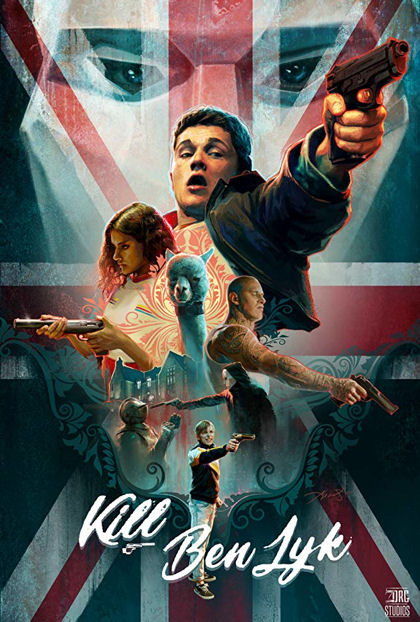 Knight Ben Lyk (Daniel Page) is dead. YouTuber Ben Lyk (Eugene Simon) is scared and he’s not even the Nervous Ben Lyk (Bronson Webb). Three people with the name Ben Lyk’s have been killed in London. Not even the large Rugby Ben Lyk (Charlie Rawes) is safe. Scotland Yard is rounding up the remaining Ben Lyk’s of London, even The Girl Ben Lyk (Simone Ashley) to protect them from a murderer who seems to want to kill them all. Scotland Yard's safe house isn’t so safe though as the Ben Lyk’s of London keep dying. Older Ben Lyk (Andrew Hall), Charming Ben Lyk (Ashley Thomas), Hipster Ben Lyk (Scroobius Pip), they all want to live. In order to save their namesake the Ben Lyk’s of London must take it onto themselves to find out who’s killing them and why.

Erwan Marinopoulos directs his first feature film in a similar tale as another film released recently with a lot of award buzz, Knives Out. The many Ben Lyk’s of this film find a similar dynamic The Drysdale’s unraveling the whodunit of who’s killing them and why with a less sophisticated but funnier comical note. There’s no cast all-stars delivering unrealistic, stage worthy performances. Marinopoulos keeps it in the realm of a realism with more blood, bodies and a more typical sense of humor.

I could have gotten to know some of the Ben Lyk’s of London a little bit better before their untimely demise but Kill Ben Lyk keeps a quick pace in their sacrifice. Since this is a comedy thriller, more elaborate and outrageous deaths like the impalement running in the yard could have also been beneficial to the comedic factor of the film. Where a film like Knives Out fails to deliver there's enough Ben Lyk's in London for a high body count. Fans of murder mystery comedies like Clue and Knives Out should enjoy this lower budget debut just as much. It may receive less award buzz this year without the all-star cast but it's just as entertaining.