Watching Movies - Color Out of Space

Review of "Color Out of Space” by The Headless Critic 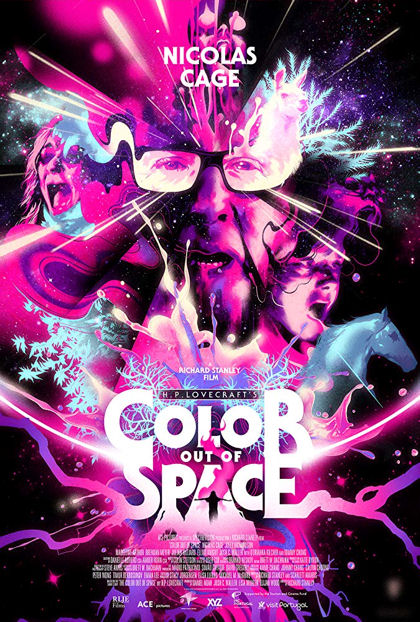 All of those years living in the big city Nathan (Nicolas Cage) and Theresa Gardner (Joely Richardson) finally got out. They’ve retreated to the remote Arkham, Massachusetts farm Nathan inherited from his father where they can raise their three children outside of the hectic city life. On the farm their teenage daughter Lavinia (Madeleine Arthur) practices witchcraft, their teenage son Jack (Julian Hillard) spends his days getting stoned with a local hippie Ezra (Tommy Chong) and their youngest son Benny (Brendan Meyer) seems to have adjusted most to the laid back lifestyle, enjoying the Llama’s the family are raising on the farm.

The Gardner family is living the dream. It is a dream. Then in a flash of indescribable color a meteorite crashes in their front yard absorbing into the ground. Absorbing into a nightmare. The growth produced from the unearthly addition to their front lawn brings forth bright new colors and vibrant life throughout their land. The fruit it brings forth is foul and something is living in the water. People are quickly deteriorating, their bodies and their minds. Mom and Dad are acting strange and the llamas, the poor llamas are growing into one.

Based on a H.P. Lovecraft tale, from the enigmatic director Richard Stanley starring eccentric thespian Nick Cage. Something celestial was bound to happen. Stanley paints Lovecraft's world in vivid colors both visually and in characters. Nicolas Cage is Nicolas Cage struggling to find a realistic symphony for everyday life and excelling eccentrically when he loses his mind. Joely Richardson's recovering character plays straight well off of Nicolas Cage. It's also nice to see underutilized comedy legend Tommy Chong used in a fitting role.

Lovecraft fans will no doubt find the film lacking as tales translate better from pen to mind than they do pen to film. Richard Stanley still gives us a stunning world of colors making an unorthodox mixture of comedy and horror work in a way few films have. The horror imagery is sure to live on in the minds of viewers for decades to come. Effects are practical, CGI is flawless, Nick Cage is outlandish and the Color Out of Space is disturbingly beautiful.