Review of "Scream, Queen! My Nightmare on Elm Street” by The Headless Critic 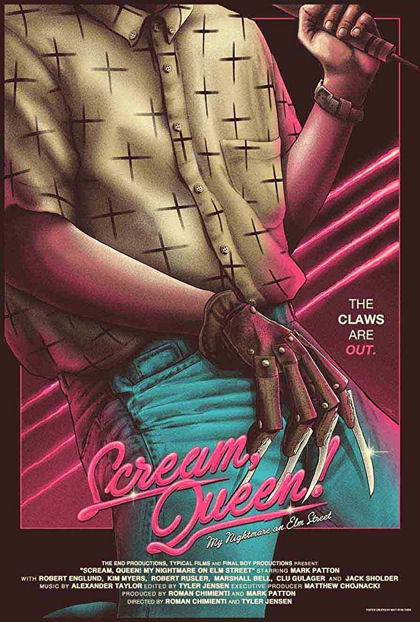 In 1984 Wes Craven released a nightmare into the world in what many consider the most frightening horror film of the decade. A Nightmare on Elm Street was never meant to have a sequel. Looking to capitalize on the popular film, studio executives commissioned first time feature writer David Chaskin’s script under sophomore feature director Jack Shoulder to continue Craven’s characters in a sequel. The result was a box office disappointment that almost killed what would go on to be an iconic horror franchise. Panned by critics A Nightmare on Elm Street 2: Freddy’s Revenge was considered a failure even though it earned ten times its budget back at the box office. With time some films find their audience.

For an entire generation A Nightmare on Elm Street 2 was the first commercially acceptable gay film. Though the general public in 1985 was largely oblivious to this for many viewers the gay subtext of the film wasn’t subtext, it was right there. An oblivious audience still weren’t ready for the first male horror scream queen. Twenty year old Mark Patton was cast in the lead role of Jesse Walsh, replacing Heather Langenkamp’s Nancy as Freddy’s arch rival, a role traditionally held in horror films by a woman. Script to page the homoerotic undertones of the film may not have been prevalent to a twenty year old gay actor who wasn’t out yet. After the backlash of A Nightmare on Elm Street 2 rising actor Mark Patton left Hollywood and left the country for twenty years.

“This movie is the gayest thing and we did Xanado last month.” - Peaches Christ

Controversial at the time of its release the second Nightmare is looked back upon fondly by a generation of the LBGT community. Star of the film Mark Patton is also celebrated for what he endured after being exploited for the film and forced into exile to find peace after its release. This is the story of the first male scream queen and his Nightmare on Elm Street.

My one complaint about most documentaries including the A Nightmare on Elm Street series documentary Never Sleep Again is they try to cover too much in the limited runtime of a feature. Scream, Queen! focuses in on the controversial homoerotic Freddy film and the impact it had on the life of its homosexual star Mark Patton in detail. This is the story of the man who walked away from Hollywood to avoid judgment of his sexual orientation and avoid persecution by a judgmental 1980’s public. Follow Mark Patton on his journey back to a reunion of the crew of A Nightmare on Elm Street 2: Freddy’s Revenge including cast members Lisa Webber, Robert Rusler, Marshall Bell and Clu Gulanger. See the cast reunite nearly thirty-five years after the films release including an appearance by franchise star Robert Englund. Watch Mark face the longtime animosity he’s held with the film and its writer David Chaskin. Hear how he survived a in a highly homophobic time period while in the public eye by creating a life in exile for himself in Mexico surviving tuberculosis and living with HIV.

Roman Chimienti and Tyler Jensen's Scream, Queen! transported me back to how homosexuality was perceived in the 1980’s. It brought back the fear of aids as it spread across the country through misinformation. My Nightmare shines light on forgotten 1980’s pop culture references that made making fun of being gay seem normal and acceptable. This is truly a powerful film filled with emotion showing us a comparison of how homosexuality was perceived in the world we grew up in next to the far more informed and progressive world we live in now. The contrast is vast and enlightening of how far we’ve come from and how far we have to go. Mark Patton has an amazing story of stardom, obscurity and survival. The culmination reunion and coming face to face with with your enemy and eventually yourself brings his life in film full circle in a perfect ending to a new beginning.

Cannot wait to see this movie!

It's my favorite movie of the year so far.

Not everyone is good at Watching Movies Without Your Head.