Review of "Underwater” by The Headless Critic 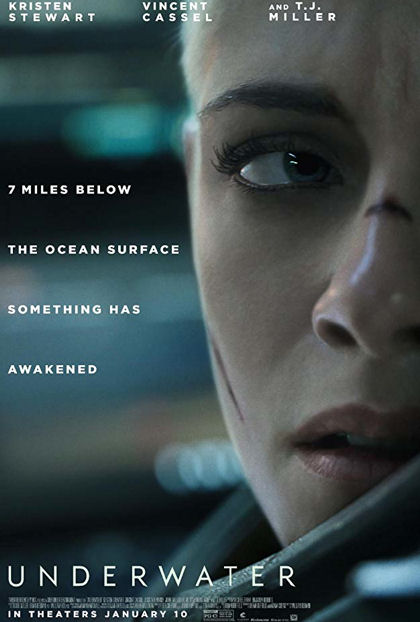 You are now five thousand miles from land and you’re descending seven miles to the bottom of the ocean. Tian Industries deep sea drill team full of over 300 aquatic researchers are excavating seven miles below the ocean’s surface in search of natural resources. They aren’t meant to be down here. Mechanical Engineer Norah Price (Kristen Stewart) just finished showering when she found a leak on the Kepler 822 station she’s called home since taking up an underwater residence aboard the station. Moments later she’s just escaping as her section of Kepler 822 collapses in on itself. Seven miles below the ocean’s surface the crew faces imminent peril when what appears to be an earthquake shakes everything. A group of survivors that band together with limited resources must abandon their station before it is destroyed and walk a mile at the bottom of the deepest part of the ocean floor in hopes of finding a way home at the nearby Roebuck Station 641. On the ocean floor dangers are lurking in the dark that surrounds them and escaping the catastrophic collapse of their station is only the beginning of what awaits this underwater group of survivors.

Thrown into the action in the first five minutes, the only members of the aquatic research team we get to know at all before this becomes a story of survival is Norah played by film star Kristen Stewart. We get a brief shower scene with Norah only connecting to her through some poorly done, afterthought narration that opens the film. The rest of the cast is introduced to us as survivors and includes Rodrigo (Mamoudou Athie), Paul (T.J. Miller), Captain (Vincent Cassel), Emily (Jessica Henwick) and Smith (John Gallagher Jr.). The talented cast cannot make up for the film barely investing any time into of their characters. Vincent Cassel and John Gallagher Jr. in particular give us somewhat intriguing characters that are simply glimpsed upon. Comedian T.J. Miller will win audiences over without the investment of a story into his character by playing the same likable, comedy relief character people know him from in other films.

The film looks flawless. While I may have some personal distaste for the space like underwater suits they chose the effects are spot on. It’s definitely a movie for the big screen. Whoever did the CGI on this film should be hired more often for such films as it’s far better than most. While by no means any expert I do question these people ascending and descending so rapidly that far under the see being realistic. As someone watching who isn’t a deep sea diver it just doesn’t seem legitimate. From the opening scene director William Eubank creates an intense atmosphere that draws you in. It isn’t until you realize while these people may be in the deepest part of the sea their characters are very shallow that the audience loses interest. I’m not sure if it was lack of writing or the characters were lost in the editing room. Co-writer Adam Cozad has given us films with shallow and forgettable characters before in both his feature screenplays The Legend of Tarzan and Jack Ryan: Shadow Recruit while co-writer Brian Duffield created excellent character depth in the two features of his I’ve seen Jane Got a gun and the comical character driven The Babysitter. Without an investment in the characters it just doesn’t matter if they live or die which is what they film is about, survival.

The comparison the studio is marketing the film as, calling it Alien underwater couldn’t be further from truth. While it is human against an underwater creature, there is no element of sabotage. there’s no question of robot defying the human it serves and with a monster so big there is no one-on-one Ripley versus Alien moment. There is another comparison to many films the studio probably doesn’t want to make. Sadly before the character could even get interesting the only African-American in the film is the first of the survivors to die. A typical horror move cliché done in countless films that I thought Hollywood had moved past in big budget productions after Jophery Brown was eaten in the raptor pen of Jurassic Park in 1993. I suppose the saving grace of Underwater is supposed to be the larger than life, Cthulu monster reveal ending. While the monster looks excellent and may be the best incarnation of Cthulu on screen, time wasn’t put into the characters for what this film really needed which is a heart.