Review of "The Turning” by The Headless Critic 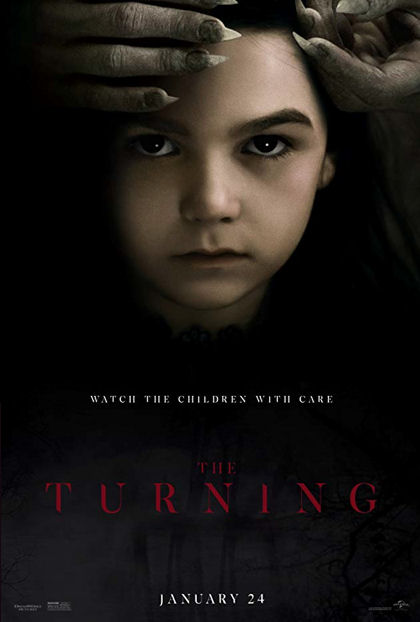 She hasn’t been a governess since the 1800’s until Kate Mandell (Mackenzie Davis) takes a lucrative job living at the upscale estate of the Fairchild family tutoring the youngest child and heiress to her deceased parent’s fortune Flora (Brooklyn Prince). Kate’s mother Darla (Joely Richardson) spends her days painting in a depleted pool of a mental institution so Kate understands the children being alone. The Fairchild’s two children on the other hand are thoroughbreds, bred from the union of two upper class families. Kate is not sure she belongs here.

Flora and Kate quickly become best friends. With the aging, longtime family servant Mrs. Grose (Barbara Marten) serving as a primary care giver, tutoring such a young child with no parents fast becomes like being a parent. Then Everything changes when Flora’s teenage brother Miles (Finn Wolfhard) arrives home unexpectedly when he’s expelled from boarding school. When the rebellious Miles returns home strange things begin happening at the estate. Kate learns that the children haven’t just lost their parents but a couple of the servants as well. Family employee Quint (Neil Greig Fulton) died and another employee Jessel (Denna Thomsen) disappeared in the middle of the night. The longer Kate stays the more the events she’s experiencing seem to be supernatural. It all has to be linked to the boy being home somehow, it has to be. “Watch the Children With Care.”

Based on the Henry James novella The Turn of the Screw written in 1898, in the century plus of its existence the novella has been turned into numerous plays and films in multiple languages most notably perhaps being the highly acclaimed 1961 film adaptation The Innocents. The Turning is set in 1994 randomly for seemingly no other reason than Kurt Cobain's death. If you’re going to set a film in that time period without a good reason you might as well have made it 1998 to mark the one hundred anniversary of the original work.

Italian/Canadian director Floria Sigismondi has directed the likes of David Bowie, Justin Timberlake, Katie Perry, Rihanna, Christina Aguilera, Marilyn Manson, Pink and many more in a four decade career. All were done through an extensive life’s work she’s made of directing music videos. Her only feature film prior was the appropriately subjected The Runaways in 2010, telling the life of the 70’s all girl band of the same name. Sigismondi’s first feature film rightfully met some critical acclaim Her return to feature filmmaking a decade later is a completely different venture tackling a popular literary work of the horror world with zero ties to the music industry.

After an introduction to what went wrong at the Fairchild estate we’re briefly introduced to our main character Kate Mandell and her life before entering her new job as the Fairchild’s governess. The build is slow and seemingly methodical. The story of what happened at the estate before she took up residence unfolds at its own pace. The setting is beautiful with a cinematic eye you expect to find from a director who’s mostly shot music videos. The reason for what's happening at the estate is given a possibility of layers in both the Fairchild children’s parents deaths and also family employees who died and went missing.

What’s actually happening at the estate is also given three possible scenarios. The most obvious is a traditional haunting. With ghost blatantly seen in the windows by multiple people there’s no denying this is a haunted house film. Then there’s the deviant son Miles who seems to bring on the majority of what’s happening on himself. He may possibly be a mastermind behind it all or at the very least he’s escalating the third scenario which is insanity. The layers of possibilities built within the story are brilliant, largely thanks to the writing of Henry James. The final outcome of the film however is not brilliant, nor does it come from Henry James.

As stated before the scenery is beautiful and the slow build seems methodical. While there are a few instances of amateur filmmaking involved and the slow pace may lose a younger audience with shorter attention span, the film remains intriguing film at the intrigue of a fulfilling outcome. In the final act everything that was built up to is blown out the window in a haze of smoky ghosts and overexposed reflections. By the end of the film just like the year the movie is set in, multiple aspects of including Flora having a fear of leaving the property have no payoff. In what will go down as one of the worst endings in cinematic history, the film ends flashing back and filling in scenes we weren't shown before, then it ends again this time more unfulfilling than the first false finish. The intended shock to the audience is only present due to the audacity of the filmmakers for making this and Universal Pictures for letting it be widely released in theaters throughout the country.