Review of "Cry Havoc” by The Headless Critic 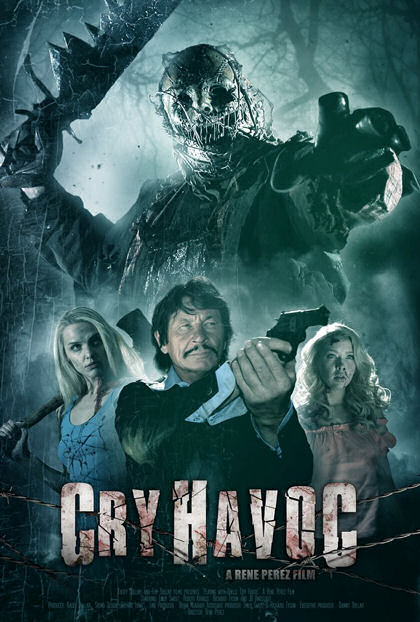 Years ago an extremely wealthy man who likes to watch unleashed him from his prison confines and he’s wreaked Havoc on beautiful women at the end of his blade ever since. Havoc likes to play with dolls. A barren wasteland is his playground, a burnt canvas he paints with their blood. The massive amount of women who have gone missing in recent years hasn’t gone unnoticed by police but the identity and whereabouts of the man known as The Voyeur (Richard Tyson) remains a mystery to officials. To keep his killer supplied with beauties to bludgeon The Voyeur sends out a casting call for a reality show to lure unsuspecting, aspiring actresses in to a tv show that will never be made. Auditioning for this role means auditioning to die, method acting is required.

Through the casting call, local Iowa reporter Ellen Weaver (Emily Sweet) tracks down the unnamed Voyeur who’s made the FBI’s top ten most wanted list. She just wanted to score an interview that would make her young career. What happens instead is she unknowingly steps onto Havoc’s playground. Struggling to survive in a land where all dolls die, the one saving grace this reporter may have is a Detective (Robert Bronzi) and father who followed her there looking for his own daughter who’s gone missing. Police may not be able to find The Voyeur but a rogue detective just found his killer and the battle is on.

After Playing With Dolls for three films director Rene Perez is finally unleashed to Cry Havoc and let slip the dogs of war. A prolific grindhouse, independent director for the last ten years, Perez has built a traditional slasher film franchise empire in three previous films with the killer Havoc. He’s also launched the career of what may be the last traditional action movie star in three films with the muscular Charles Bronson look-a-like Robert Bronzi. In Cry Havoc the action star and the horror villain meet face to face for the first time bringing the two films worlds of Rene Perez together.

Every film fan who grew up in the 1980’s wanted to see Arnold Schwarzenegger face off with Jason Voorhees or see Sylvester Stallone battle Leatherface. That day may have past unfulfilled but Rene Perez lives out that dream in 2020 pitting Bronzi vs Havoc. In true 80’s action movie style there’s gunfire and fistfights. In true 80’s horror movie form there’s naked women and gore. It’s a Charles Bronson movie inside a Friday the 13th film and it’s so much fun.

I am a Bronzi fan. The Hungarian born actor with only a handful of English language films on his resume may need a voice over actor much like Arnold Schwarzenegger did in his early films but he’s also being utilized in the correct way just like his look-a-like Charles Bronson which may make him America’s last action movie hero. I am also a Havoc fan. While the Playing with Dolls trilogy was growing into itself the barbwire masked Havoc is a terrifying mindless killer the likes we haven’t seen since Jason Voorhees. The prospect of these two meeting in a film had me salivating like a teenage girl going to a boyband concert.

Like other Rene Perez films it’s an excerpt of life starting mid-story with a lot of slow motion utilized to make his unique filming style. The final battle as the two icons meet did leave me wanting more but who’s to say we won’t someday get exactly that? Without giving spoilers I’ll just say that I love The Texas Chain Saw Massacre ending with a crazed girl running out into the middle of nowhere and I look forward to see where both Bronzi and Havoc go from here either in cinema together or separate in their own continuations.