Review of "Guns Akimbo” by The Headless Critic 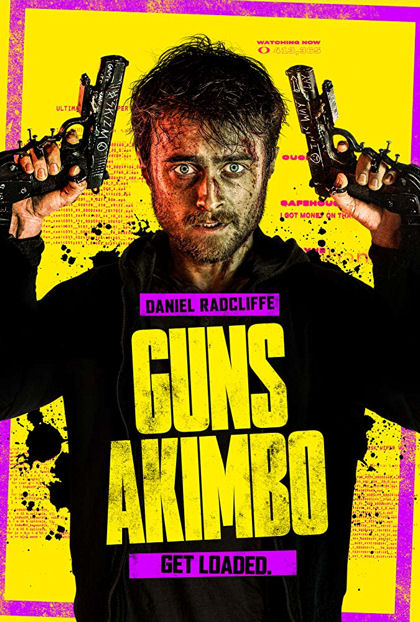 Miles Harris (Daniel Radcliffe) is having the worst day of his life. It’s also the first day since he became a celebrity. "It can be a fucked up world out there right?" When Miles was a kid he wanted to be a hero, a warrior. Instead he grew up to be a nobody spending his days flicking through the same three apps on his phone. Miles became a keyboard hero who trolls the trolls on the internet, and then Skizm. Skizm is an online sensation that picks random psychos, weirdos and criminal and makes them fight each other to the death on the streets for the internet views. It’s the worst side of humanity on show, it’s disgusting. Miles was just unwillingly picked to participate in it, tasked against crazed, drugged up, killing machine Nix (Samara Weaving) kill or be killed. This is the simple story of a professional internet troll who pisses off the wrong people and wakes up with guns for hands, trapped in a deadly internet reality show with life and death consequences.

Deathgasm creator Jason Lei Howden returns to the director’s chair for his second feature film. Guns Akimbo is an intelligent Crank thrill ride from start to finish. Like Stephen King’s The Running Man mild-mannered loser Miles who’s still in love with his ex Nova (Natasha Liu Bordizzo) wakes up to find himself thrown into a deadly game he wants no part of with a gun bolted to each of his hands, forced to kill if he wants to survive. A video game and comic inspired film that has CGI befitting a game that could use improvement in their graphic design, the filming style likens to comic based movies like Sin City in its stylized production that works within the reality of the film. Matching video game sound effects and retro rock music modernized as a soundtrack adds a driven pace to the film.

Guns Akimbo combines a modern filming style with fresh visuals and what will be my favorite soundtrack of the year. It’s a simple story told in a refreshing way. Samara Weaving is cast poorly as a drugged up hitwoman from the streets but the film stays unrealistic enough it doesn’t matter she doesn't fit the role. Daniel Radcliffe is cast perfectly as a loser continuing the actors resume of interesting roles in original films. The only horror in Guns Akimbo is the idea of waking up with guns bolted to your hands but it’s a movie that goes way beyond. It’s an action, comedy horror fans should definitely enjoy.