Review of "Fantasy Island” by The Headless Critic 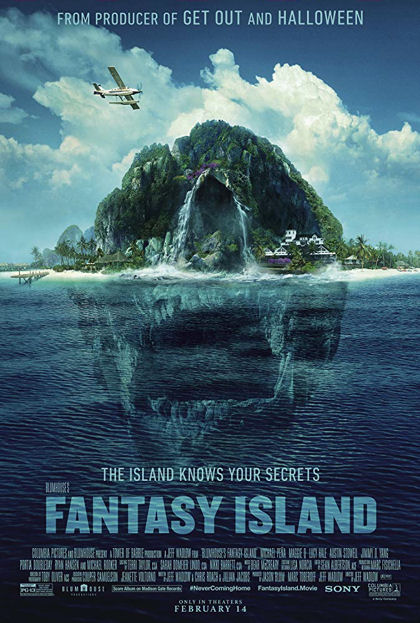 The plane! The plane! A select group of five people have been given private invitations from eccentric Mr. Rourke (Michael Peña) to be his personal guests at his private island. When the plane lands Mr. Rourke informs the group of mostly strangers that the island promises to make their true desire to come true. “The island knows your secrets.” The only rule is they must see their fantasy out to the end and not all outcomes will be what they expect. Welcome to Fantasy Island.

Years ago Gwen Olson (Maggie Q) said no when she should have said yes. The life she could have had if she married the love of her life is only a fantasy away. Patrick Sullivan (Austin Stowell) wasn’t accepted into the armed forces so he became a cop instead. Now he’s given a chance to fulfill his fantasy following in his deceased father Lieutenant Sullivan’s (Mike Vogel) footsteps on the battlefield. Melanie Cole (Lucy Hale) had her life forever changed due to her high school bully. If she had one fantasy it would be to get vengeance on those who wronged her. Brothers J.D. (Ryan Hansen) and Brax’s (Jimmy O. Yang) simply want to be the most high profile partiers around, living the fantasy life. Now their fantasies will come true. “Anything you desire. Everything you fear.”

What will go down as the worst cast, wide theatrically released film of the year, Blumhouse once again produces an awful flop at the box office. The leading horror production company shot to the top in 2017 with hits led by horror newcomer Jordan Peele’s Get Out and almost forgotten horror veteran M. Night Shyamalan’s Split. The expectations to stay on top have not been met. Content has been greatly increased from Blumhouse but quality has steadily declined. Their multi-million dollar, wide theatrically released films are the same quality of production as their Hulu Into the Dark series that's made for tv. All of the blame doesn’t go to Blumhouse's uninspired cookie cutter horror films as co-writer and director Jeff Wadlow proves in his third horror feature that he should stick to other genres. A horror adaptation of a popular '70s TV show isn’t an original idea with The Banana Splits Movie having done something similar just last year in a much better movie. It’s still an idea I like and there’s room left for improvement from both films for that idea to be done better.

Even to those who don’t know him by name Michael Peña has become a beloved household face through a charming smile we’ve seen in television and on film for the last four decades. To cast the blue collar actor as a horror version of the refined Mr. Roarke originally portrayed iconically by Ricardo Montalban is just mind-numbing. Even the most talented actors sometimes aren’t meant for certain roles. A dispassionate performance by Maggie Q doesn’t liken her as a lead protagonist. Austin Stowell doesn’t work on any level as a soldier wannabe, police officer or son in the films most unauthentic role. While I was impressed with Mike Vogel overall in the film, being cast as the father of Stowell’s character doesn’t work either. Casting Kim Coates as Devil Face seems like a complete waste of a talented actor. Michael Rooker is also wasted on a small role anyone could have done. I won’t even tell you what they did with Hervé Villechaize’s iconic character Tattoo. All of the casting choices aren’t bad. Ryan Hansen reprises a different character but the same role he played in 2016’s Central Intelligence which he fits amusingly well. Such a character is more fitting for The Hangover remake than a horror film but that's an issue in writing not the actor's performance.

Casting isn’t the only issue with this horror fantasy. Fans of the original series will only be upset trying to watch this newest incarnation. The super natural elements of the film go too far for Fantasy Island. The CGI black liquid the film that is cast as the main villain is taken straight from another Blumhouse feature and the worst movie 2019 Black Christmas proving the company is struggling to break out of their cookie cutter mold. The twist ending or big reveal or whatever you want to call it is at best anti-climactic. You have to invest the audience in your characters for moments like that to have meaning and if there’s one thing the movie Fantasy Island doesn’t do that the television show did well it’s invest the audience into the people who stepped off the plane. When you hire writers from professional wrestling and Big Brother this is exactly the kind of film you should expect to get.