Review of "Friday the 13th: Jason Lives"
by The Headless Critic 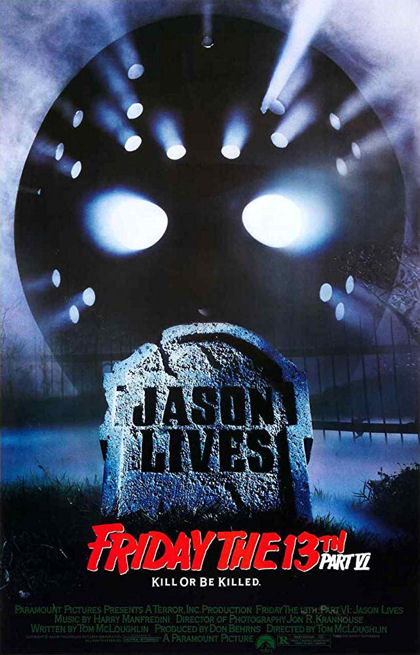 "You know what today's date is don't you?" This Friday the 13th tortured teen Tommy Jarvis (Thom Mathews) returns to Camp Crystal Lake to dig up the body of notorious killer Jason Voorhees (C.J. Graham) to make sure he’s really dead. Tommy won’t be able to rest until he sees Jason in his grave. As deaths around Crystal Lake continue to occur, local Sheriff Garris (David Kagen) knows tormented Tommy Jarvis returning to town is the reason. No one believes teenage Tommy accidentally resurrected a Frankensteined killer Jason who’s now carving up anyone who crosses his path except the Sheriff's daughter Megan (Jennifer Cooke) who has herself a little crush on bad boy Tommy. If you thought Jason Voorhees was hard to kill when he was alive it’s now impossible since he’s been revived.

The Friday the 13th series is my favorite slasher franchise. While I know they aren’t all the best slasher movies, they hold a special place in my bloody heart. The sixth film in the series is a lot of people’s personal favorite. The awful James Bond opening aside, Jason Lives, lives up to its name as the first film that without argument gives us zombie Jason Voorhees. “Just because our parents tell us Jason is only a legend doesn’t mean it isn’t true.” With Alice Cooper singing Teenage Frankenstein at Jason’s resurrection what isn't there to love? But how does it measure up to the rest of the series? There are an appropriately numbered thirteen keys to Friday the 13th success. In no particular order…

1. A High Body Count: Zombie Jason likes to kill more than he did when he was alive. Nearly doubling the kills of the original two films, Friday the 13th Part 6 is not short of bodies. With several characters added in just to be killed the nearly twenty deaths in the film is too much. Jason still falls short of the absurd number of kills in later films.

2. Bad Acting: The Ernest Goes to Camp of the Friday the 13th films chocked full of over-the-top performances. If you’re going to hire one actor from Welcome Back Kotter and you pick Horshack (Ron Palillo), you can no longer defend your cast. It isn’t so much that the actors are bad as it is the characters are more ridiculous than Junior and Ethel Hubbard. Jason Lives is Friday the 13th on steroids which includes a Police Academy level of over-the-top characters turning the franchise into a complete comedy. Heading the cast of comical bad acting is the Crazy Ralph worthy character Gravedigger Martin (Bob Larkin) who I actually approve of. There's also an awful group of paintball survivalist who literally act like Ernest P. Worrell included just to die.

3. Camp Crystal Lake: Revived from his grave and returning home just in time for camp to open once again the setting is just right for Friday the 13th. I would have loved for Jason to have spent a little more time at camp than he does getting there. Part six does seem like they're on the run a lot instead of frolicking in the woods as they should be.

5. Teens Dying as they Deserve: If Horshack was a teenager when Welcome Back Kotter ended in the 70’s there’s no way he’s a teen seven years later when Jason Kills him. The sixth film does something I really like bringing kids back to camp and into the Friday the 13th franchise but there isn't a credible counselor in sight. Unfortunately there aren’t many teens to die either. The majority of kills are business executives on a paintball retreat in the woods and expendable police officers. Only a handful of teenager counselors get it.

6. Sex: Why does a husband to be have to lure his fiancé into the woods to get laid? I do not know. There isn’t much action in part six of the franchise but we do get the best PG RV rocking out there is. We also get Tommy Jarvis continually starring at his love interest's crotch. That’s as good as it get in six.

7. Boobs: In a Joe Bob Briggs form of counting boobies, we are treated to absolutely zero nudity. Out of all the Friday the 13th, Jason Voorhees films there’s only one that delivers no nudity what-so-ever and it’s this one. No boobs, no butts, just a shirtless teenage boy and a disturbing, fully clothed, crotch starring scene.

8. Stalking: Traditional Jason stalking is evolved. Terrifying kid campers as they sleep and a role reverse stalking as Jason gets interrupted while hacking a victim to death are some of the best stalking scenes in the whole franchise. Otherwise stalking isn’t the strongest part of Jason Lives but it’s there, there’s originality to it and it works.

9. Machete: The strongest part of the sixth film may be the use of the classic Jason killing weapon, the machete. Three decapitations, two impalements and perhaps most impressive two complete dismemberments, all done by machete. There’s nothing that says Jason Voorhees more than a machete kill and Jason Lives delivers.

10. Eccentric Deaths: Machete kills total the majority of deaths but that includes two dismemberments. There’s also an iconic face smashed into the tin of the RV kill. There's multiple impalements including an american eccentric mud puddle drowning and a bottle to the neck that's preceded by a foretelling one-liner. Not every kill is great with less inspired head squeezing scenes are helped by sound effects and not visuals. In the most unforgiving death of any film Jason Voorhees kills a classic Volkswagen Beetle, R.I.P. Jason’s ultimate underwater demise at the end of the film is the most fitting fate for him of any film in the series which is perhaps why they did it twice.

11. Even More Eccentric Body Reveals: Sadly this seems to be a lost art in the on the go reincarnation of Jason in part 6. In a film that focuses largely on the police, bodies reveals are mostly phoned in. However there is a nice find of body parts in the woods by police.

12. A Nemesis: The greatest adversary of Jason Voorhees is back for his third film played by the third actor. While Thom Mathews version of Tommy Jarvis cannot live up to Corey Feldman’s initial creation, he is more easily liked than John Shepherd’s troubled Tommy Jarvis from A New Beginning who was more seriously portrayed as the possible killer.

13. A Killer Voorhees: Jason Lives! And he looks great. While I will always like my Jason Voorhees alive and kicking, the role largely portrayed by C.J. Graham except for in a few scenes, sets the tone for zombie Jason and the Kane Hodder portrayal to come.

So how does Tom McLoughlin's film tally up for a Friday the 13th movie? The visuals for Friday the 13th hit their stride. Zombie Jason looks fearsome. The camp is clean cut Hollywood perfect. Traditional Friday the 13th mainstays like teenagers, sex and nudity are largely abandoned while the killer aspects of Jason are expanded upon. Comical characters due their best to ruin the film turning it into a comedy. In the end Jason kills the comedy leaving only his arch nemesis Tommy Jarvis and the female lead in a final battle. The finale of Jason Lives is one of the best in the series. Jason’s final resting spot, at least until the next film, is the best in series history.