Review of "Leprechaun” by The Headless Critic 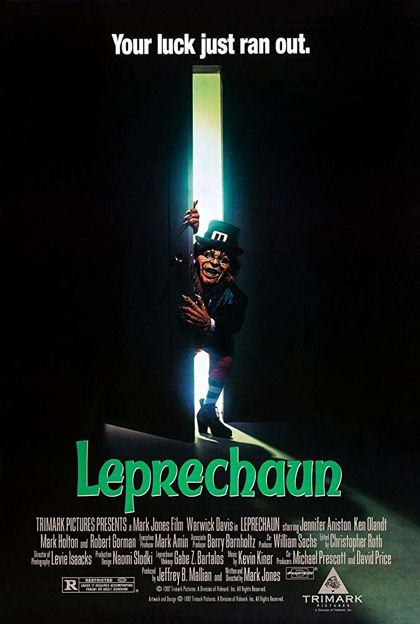 J.D. Reding (John Sanderford) and his daughter Tory (Jennifer Aniston) just bought the O’Grady house that's been abandoned for the last ten years. Along with Three Guys Who Paint, Nathan (Ken Olandt), Alex (Robert Gorman) and Ozzie (Mark Holton), they intend to restore the house to a livable home. Ozzie, who the kids pick on for not being too smart just unknowingly unleashed a pent up Leprechaun from the basement that's hell-bent on getting his gold back. “Your luck just ran out.” Try as they will and try as they might, he who steals me gold won’t live through the night.

Longtime television writer of about every show you’ve ever watched ever, Mark Jones takes on a directorial role for the first time in his feature film writing and directing debut. Filmed like a family sitcom, Leprechaun is very much Child’s Play meets Full House. The Reding family and the helpers are a full of characters you’d find on any sitcom of the era. Complete with a family friendly romance between Tory and Nathan. Ozzie and Alex are a television version of Sloth and Chunk from The Goonies. All while a wisecracking little killer runs around stalking them and shining their shoes.

Warwick Davis is perfect in his iconic role and his costume is on point, Lucky Charms horror. Leprechaun immediately became an iconic horror character mentioned alongside greats like Freddy Krueger, Jason Voorhees, Leatherface and Chucky. There’s no doubt he has more one-liners than the horror king of one-liners Freddy Krueger. Every St. Patrick’s Day many horror fans live and die by the Leprechaun. While I must admit it’s a little too much comedy to be horror for me, I do get a kick out of a Leprechaun that can’t resist shining shoes and I love Warwick Davis in the role.