Review of "The Invisible Man” by The Headless Critic 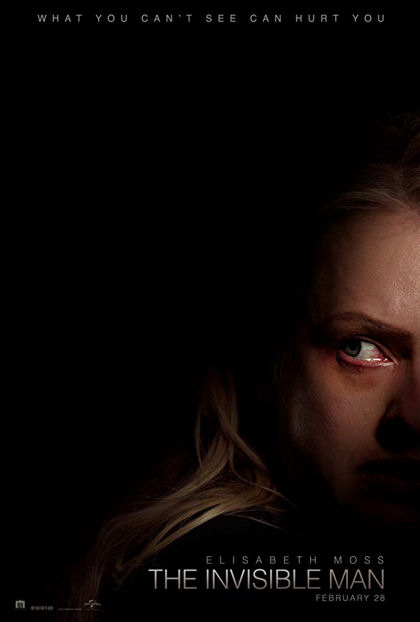 He’s asleep with the assistance of the diazepam Cecilia (Elisabeth Moss) slipped him. This is her chance to get out of the abusive relationship that’s been controlling her for years. Adrian (Oliver Jackson-Cohen) always told her if she ever leaves him he’ll find her, walk right up to her and she won’t even know he’s there. He has the money, connections and mind control over Cecilia that she believes him. Once free from his home, Cecilia stays in hiding, away from her friends and family including her sister Emily (Harriet Dyer) who helped her escape. James (Aldis Hodge), a friend of her sisters and beyond friendly cop welcomes Cecilia into his home where he offers protection and even lets Cecilia share a bed with his teenage daughter Sydney (Storm Reid).

News of Adrian’s apparent suicide over her leaving him reaches Cecilia and she finally sees her freedom from his control entirely. A life without fear is in sight for the first time in years. Further news that she’ll receive millions from Adrian’s will sets Cecilia up for life. Even in death Adrian still haunts her though. Strange events convince Cecilia that Adrian is not only still alive but that he’s somehow stalking her unable to be seen. As everyone around her begins to question her sanity Cecilia holds to her belief that Adrian’s words will come true now that she’s left him. He’ll find her, walk right up to her and she won’t even know he’s there.

Saw and Insidious writer Leigh Whannell proved he could helm a wide theatrically released film directing his first feature in 2015’s Insidious Chapter 3. In 2018 Whannell upgraded in his highly acclaimed movie Upgrade. Whannell’s third feature is a roaring 20’s evolution of a movie originally made nearly one hundred years ago. Forget Universal’s failed Dark Universe that attempted to reboot the classic Universal Monsters starting with the awful The Mummy starring Tom Cruise which you can find a detailed bashing of here. Instead of rehashing movies we’ve seen before redone with excessive CGI and top dollar actors who are way past their prime, Whannell writes an innovative script to an old retelling, that’s character driven instead of a soulless action horror movie.

The Invisible Man is the first wide theatrically released horror film of 2020 that isn’t Godawful. Like Leigh Whannell’s Upgrade, it's a character driven action film that could have used a bit more horror. Elisabeth Moss isn’t the typical women you’d find a man like Adrian Griffin obsessing over but that is addressed in the film and with psycho obsession there is no real criteria. All of the performances are done well. There’s far more character development than anything the Dark Universe has offered before focusing on the making of an individual story rather than a bigger picture. Sometimes the events of the film are anticipated but at other times they’re out of nowhere, neck slicing unpredictable. Elisabeth Moss does an good job in her lead role. I could have used more of James Lanier in the film as Aldis Hodge. He creates an intriguing, Good Samaritan, hero of a character. My biggest complaint is there was a huge missed opportunity to create more doubt in the reality of an invisible man as opposed to Cecilia going crazy. This is given away in an awful trailer that shows way too much and has been played everywhere you look so you can’t even escape it if you wanted to.