Review of "The Platform” by The Headless Critic 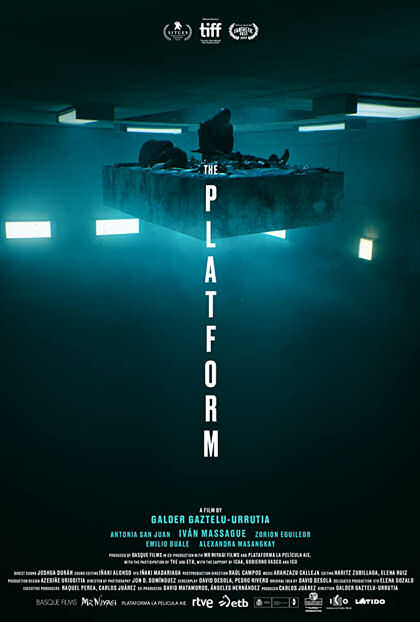 “The panna cotta is the message.” Some enter freely, some come by choice. For Goreng (Ivan Massagué), he saw a simple path to an accredited diploma that he didn’t earn, at least in the traditional sense. A six month stay for Goreng in an experimental prison called The Pit or The Hole to have the credentials he needs to live a better life once he is out. If only it were that simple. His first day inside Goreng finds out from his cellmate Trimagasi (Zorion Eguileor) what he’s really signed up for. The Hole is an underground concrete prison full of who knows how many vertical cells about twenty feet tall each, stacked on top of each other. There are no doors, there is no leaving until your time you’ve committed to is served. There are two occupants per cell and a large hole in the middle of each cell that works as a dumbwaiter for food delivery. You can look up the hole in middle of the room and see an endless number of floors above. You can look below and see the same number of levels.

Level one is the highest, who knows what the lowest level is. Trimagasi does know that there’s over one hundred cells because every month that you’re in The Hole you’re assigned to a different level. Goreng has entered at level 18 near the top. Why is this important? Only one platform of food comes down each day and it only stays there for a couple of minutes for the occupants to eat. There’s no one to restrict what each person eats on every level. Only leftovers come to the lower levels and by the time the platform reaches the bottom there’s no food to left to eat. Those on the bottom levels are starved for a month with only hopes they'll be on a better level next time. The only rule is that no one can keep food in their cell. Each occupant is allowed to bring one item into The Hole and that’s all they get to keep. If you keep food the temperature in the cell will be raised or lowered until both occupants of the cell are dead or the food is returned to the platform below. Goreng has unknowingly signed up for an experiment of human survival.

In only his first feature film, Spain’s Galder Gaztelu-Urrutia has directed what is sure to be a cult classic in America. Unknowingly when it was made, this study of “spontaneous acts of solidarity” from writers David Desola and Pedro Rivero speaks straight to the current social situation in America over the past few weeks of pandemic paranoia. The social construct surrounding survival has been done in a cult movie before that closely resembles The Platform. In the nearly a quarter of a century since it was made I’ve not seen a film more closely resemble 1997’s Cube than The Platform does. Cult Cube fans should definitely enjoy The Platform as the type of film they’ve been waiting for. More recently South Korea’s Bong Joon Ho created another cult favorite Snowpiercer which while different had an equally important social commentary on spontaneous acts of solidarity.

“The Messiah of Shit” Goreng awakens in a confinement he signed up for but did not fully expect. Who brings a book into The Hole after all? The Hole is the hole and there’s nothing you can do to change the world the administration has created for those confined to it. In other words, “you can’t shit upwards”. Thinking outside the box or in this case outside the cell, The Messiah of Shit must first learn to live in The Hole then he must learn to live beyond it; stuck in a corrupt world controlled by hunger and a group of fellow inmates who all must survive there.

In 1997, an independent film called Cube opened up a world of dramatic horror storytelling through limited confines to me and many, many others. After the movie I expected many more future features to follow. Other than a handful of uninspired sequels, they did not. The Platform is the film I’ve waited twenty-three years for. While not original in concept, David Desola and Pedro Rivero create their own world, some aspects very similar to Cube. Galder Gaztelu-Urrutia creates his own unique vision out of it and I absolutely love it. Netflix picked The Platform up at the correct time when everyone is at home dealing with their own spontaneous acts of solidarity as we figure out how to send our own panna cotta message to the top in an administration that doesn’t really care about the lower levels that are experiencing suffering. This is my favorite horror film so far of 2020 for multiple reasons. It's a must see for anyone reading.