Review of "Dead by Dawn” by The Headless Critic 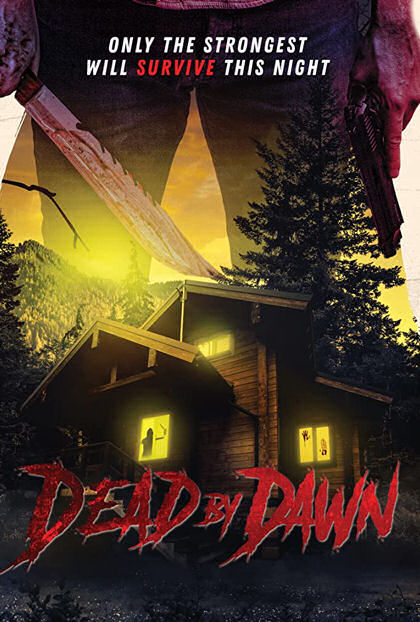 The Wolf just hit her and now Little Red Riding Hood is without a home. Lulu (Drew Lindsey Mitchell) orders a ride from an app called Cart to get out of her abusive home situation. Her boyfriend Shane (Bobby Slaski) just hit her. When her ride arrives her driver is a perverted clown that keeps hitting on her. A victim trying to find safety in a world of predators only makes Lulu’s night get worse. Far worse.

At a cabin in the middle of the woods, Dylan (Kelcey Watson) is ready to die. With his wife and daughter both deceased, Dylan no longer has the will to live and is trying to find the will to end his own life. Before he can pull the trigger, a battered and bloody Lulu desperately knocks at his door. She’s temporarily escaped a night that’s grown increasingly worse finding solace at Dylan’s house. Her predators are outside though and they’re about to find her. At home Little Red Riding Hood was attacked by the Big Bad Wolf. Now three wolves, Neil (Bo Burroughs), Snack (Jamie Bernadette) and her uncle Chad (Timothy Muskatell) want to blow her house in.

It's home invasion horror done a little different, I absolutely love the concept of writer and director Sean Cain’s Dead by Dawn. With two survivors trapped inside the house, the criminals attack outside. To defend themselves Dylan and Lulu set up a Kevin McCallister level maze of traps to stop anyone trying to enter. It’s a concept similar to a very different kind of film, the family friendly Home Alone. It’s the Home Alone maze of horror traps that I enjoy so much. I would love to see this concept expanded upon. The possibilities are only limited by the imagination and perhaps budget. The gore that comes from these traps in Dead by Dawn is limited but done well.

Dead by Dawn ends up being a mix of comedy and horror that doesn’t completely work. Inside the house Kelcey Watson and Drew Lindsey Mitchell give good performances creating victims we want to see survive. Some of their backstory could have been given earlier to get the audience more invested but it still works. Outside the house Neil, Snack and Uncle Chad bumble their way inside. The violence that ensues is bloody and realistic. Their reactions to being hurt is just as over-the-top as their characters. I could have used a little more realism in Snack’s reaction when she’s shot with an arrow. Uncle Chad is such a cliché character it’s almost unbearable. The deviants outside are a complete comedy of over-the-top characters like an adult version of Home Alone’s Harry and Marv which clashes with the drama of real world horrors from the victims trying to survive inside.