Review of "Rootwood” by The Headless Critic 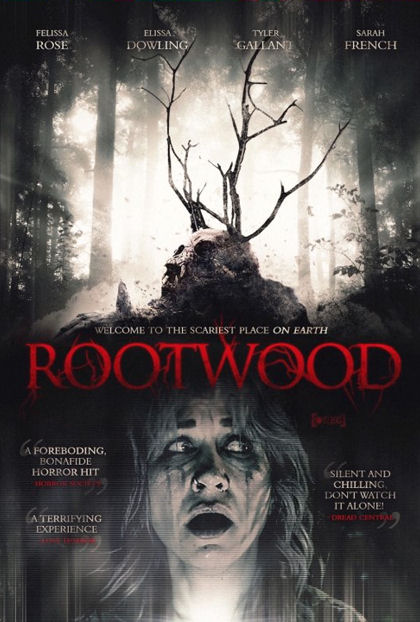 Hollywood movie producer Laura Benott (Felissa Rose) wants to make something a little different and a lot more realistic than the scripted features she usually produces. She calls the hosts of a local paranormal podcast called "The Spooky Hour" to meet with her. Her proposal to ghost gossiper's Jessica (Elissa Dowling) and William (Tyler Gallant) is for them to investigate a local area supposedly cursed by The Wooden Devil called the Rootwood Forest, recording their stay for a potential documentary. “Welcome to the darkest place on earth.” The Spooky Hour hosts enlist their friend Erin (Sarah French) to come with them to help record their investigation so they can both be on camera at the same time. Their glamour camping or glamping trip to easy money and stardom turns serious as it grows more apparent there’s something in Rootwood.

The follow-up film to Marcel Walz his highly underrated remake of Blood Feast is a film I’ve waited for because I enjoyed his Blood Feast so much. Rootwood is far more traditional and far less risky with a traditional haunting in the woods concept that’s expanded upon with a partial documentary filming style and a twist reveal. If you’re going to do a film that’s partially documentary footage from the characters cameras and the rest traditional filmmaking you probably shouldn’t shoot the traditional filmmaking part with a handheld camera. It’s just confusing as the camera switches back and forth between characters and outside the fourth wall.

Performances are good throughout the film. Felissa Rose is on the eccentric realm which fits her Hollywood producer character while Elissa Dowling gives a far more down to earth role in a realistic character I enjoyed. A long build leads to the last fifteen minutes of the film where all is revealed then revealed again, then revealed again in a twist ending with a twist. Like the back and forth camera, the double reveal is also confusing. Rootwood teases a haunting, a creature in the woods and something supernatural only to go a different direction then turn around and come back. That’s a lot for the viewer to take in with a fifteen minute finale. My first love with always be to go with a creature and they’re scary when they stare at the camera in the dark.