Review of "Abominable” by The Headless Critic 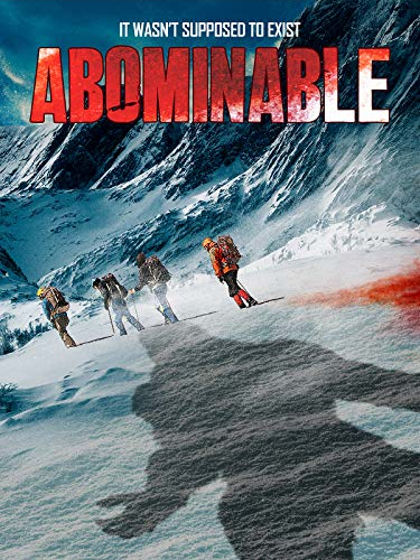 Deep in the snow capped Himalayan Mountains a research team has gone missing. A recovery team headed by Dr. Smith (Amy Gordon) is sent in to find out what’s happened to the team and recover the miracle plant they were looking for. A storm is heading their way. If the recovery group doesn’t find the missing team and make their extraction point before the storm hits, they are all sure to die there. They’re all sure to die there anyway. Something calls this remote part of the Himalayan Mountains home. They don’t call the miracle plant they’re looking for the Yeti plant for nothing. The indigenous creature of the world’s tallest mountain range doesn’t take well to guests or anyone taking forage from its land.

Though we’ve seen similar films before I enjoy the base concept writer Joseph D. Ellis comes up with of a group being attacked by a Yeti in the remote woods. Of course there is a cancer curing plant added in and human betrayal for controversy. Unbelievable dialogue is delivered by a group of talented actors the best they can. I was particularly impressed with Katrina Mattson who plays Sarah. The worst is when a character I won’t name for the sake of spoilers reveals they came to find this miracle plant because they’re dying of brain cancer. It’s such a day time soap opera reveal. This is only where the unrealistic aspects of Abominable begin and I’m not even speaking of there being a Yeti on this mountain top.

Nothing about the use of firearms in this film is believable. Guns are fired without any recoil. Muzzle flash is added in post and looks very fake or in some cases it randomly just isn’t there. The sounds of shots being fired doesn’t always match what is on screen and what the actors are doing. The entire film the cast are running around with guns and without these aspects being added in post-production they look like a bunch of kids playing gunfight in the woods. It doesn’t suspend reality which is the job of director Jamaal Burden to do.

The very opening scene a beautiful cure is found in the foliage of the Himalaya’s. Then something unseen comes to take it back. Besides flashes past the camera, the first we see of Himalayan Yeti Abominable (Timothy Schultz) we see right up the sleeve of the Yeti suit the actor is wearing as it smashes someone's head in. The hand of the creature can't even bend to hold the victim’s head as it smashes him into the tree. Himalayan Yeti likes to rip his victims apart and the blood and gore is excellent. As Abominable works his way through the research team and rescue crew there's a fantastic jaw, arm and face ripping off scene. It's fun practical effects every horror fan should love. The Yeti mask looks good as well. In 2020 seeing up the sleeve of your creature suit is an unforgivable movie sin though.

Beyond the arthritic Yeti hands that can’t bend and a Yeti who wears long sleeved fur shirts you can see up the sleeves of, actor Timothy Schultz or perhaps his stuntman if he had one didn’t fit the suit. Below the waist of the suit is loose and the torso bends at odd, unrealistic angles when the Yeti moves. If this is the best the crew of Abominable had to work with it should have been hidden in darkness with less exposure of the creature. The truly abominable thing about this movie is the lack of attention to detail. Oversights like the creature suit are run and gun filmmaking with little attention to detail and sloppy post-production. If this movie is remembered at all it will be for two or three really good acts of animalistic gore that are worth checking the film out for.