Review of "The Bone Box” by The Headless Critic 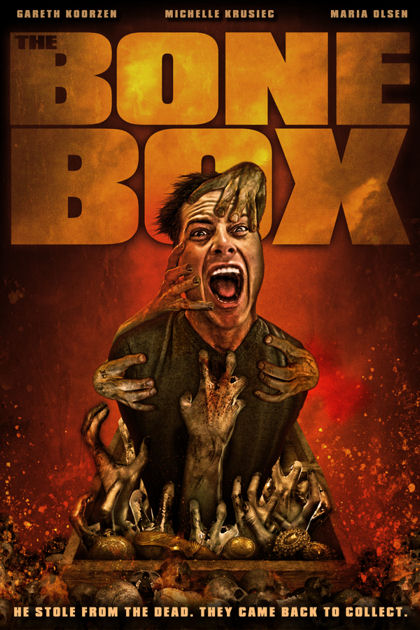 Down on his luck degenerate gambler Tom (Gareth Koorsen) doesn’t know where to turn. With his wife recently deceased and his gambling debt constantly rising, Tom moves in with his wealthy Aunt Florence (Maria Olsen) in hopes she’ll put him in her will. That’s not the lowest depth this degenerate will sink to. Out of time to pay debt Tom convinces the undertaker’s daughter Elodie (Michelle Krusiec) to follow in the footsteps of notorious, historical killer Ed Gein and Jean Baptiste and rob the graves of the rich who died and were buried in the cemetery across the street from his Aunt’s house. You take from these spirits and they take back. Strange things begin happening in Aunt Florence’s home and Tom is convinced it’s linked to the items he’s robbing from the graves and keeping in his bone box. If no one else can see the spirits besides Tom are they even there? Either this house is haunted or Tom is going insane.

Newly anointed feature director and writer Luke Genton helms a talented cast of actors in his first film. Headlined by their supporting cast of veterans including the incomparable workaholic Maria Olsen, Mighty Duck Aaron Schwartz, Sheriff Alex Burrows played by Baywatch alum David Chokachi and Deputy Ella Kade played by horror mainstay Jamie Bernadette. Jamie Bernadette really stands out in her supporting role. Though she usually plays the lead in her films or at least the lead villain, Jamie fit the role of a cop perfectly. It is a smaller part than we usually see her in but her relaxed performance is one of her best, showing her growth and range as an actress. The cast is there. Even the fairly new South African lead Gareth Koorzen delivers showing hints of Crispin Glover in his performance which I mean as a tremendous compliment.

I like the concept of a grave robber haunted by those from whom he steals. A slower paced film, The Bone Box does drag some especially for a horror movie. I don’t mind the lack of jump scares. It’s actually refreshing from the modern day Hollywood normal. When it comes time for a ghostly payoff, the film just doesn’t deliver. Good lighting and a lack of good make-up, over-expose the ghosts of The Bone Box losing their impact for scares. The score doesn’t help set the tone for anything scary and could have used some serious work before being released. The creepiest thing in the entire film is the girl in the wheel chair. It’s just a scene but that’s the type of satisfying horror that fans of the genre are looking for.

There is promise in Luke Genton’s first feature. He seems to know how to get a good performance from his cast which is really what a director’s job is. As a writer he has a good concept to build a film around. He may have stretched out what might’ve worked better as a short feature with some slow paced filler but not bad for a first feature. If all the other pieces fall together I look forward to seeing what he can produce next with this experience under his belt.