Review of "Cry For the Bad Man” by The Headless Critic

Production by: Chance in Hell Productions
Distribution by: Uncork’d Entertainment 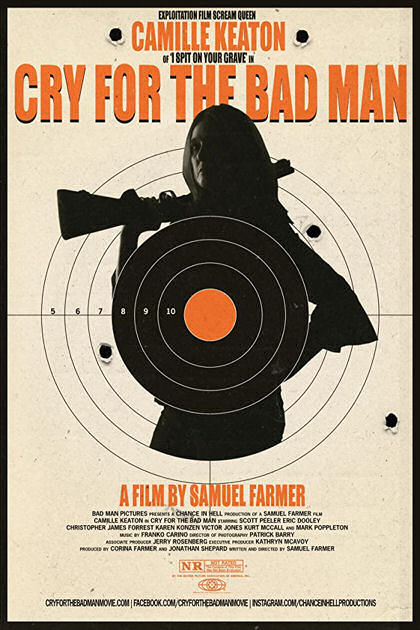 A knock at her door in the middle of the night, little widow, little widow let them in. Marsha (Camille Keaton), a recently widowed woman is threatened by a group of younger men, Wayne (Scott Peeler), Derrek (Erick Dooley) and J.R. (Christopher James Forrest) for her to sale her home. They’re the sons of the wealthiest man in town Bill MacMohan (Mark Poppleton) and they’re not taking no for an answer. Nothing they can do can make her be untrue to her guy. This is the house that her and her husband raised their daughter Helen (Karen Konzen) in. Marsha is given 24 hours to sign the papers to her house over to the bad men’s father. Tomorrow night they’re returning. Local police Deputy Pyle (Victor Jones) is no help because he's in the pockets of Bill MacMohan as well. If no one will help her, she will help herself. Nothing they can you do can tear her away from her home. Three big bad wolves come knocking at her door, Marsha is going to let them in. When a widowed woman is threatened to evacuate her own home she gets out her shotgun and fights back. If they want to take her property it’s going to be over their dead bodies.

The second feature film from writer and director Sam Farmer is a home invasion attempt that fights back. Camille Keaton is excellent as a woman who defends herself against a group of men. She plays the part so well it’s almost as if she has some experience in a day of the woman like this before. I also really enjoyed the performance of Eric Dooley. Dooley brings likability to the otherwise unredeemable bad men adding a much needed aspect of the film. This movie would have been a lot better if it wasn’t for the worst cop ever in Deputy Pyle. This one single character takes an otherwise serious film and nearly turns it comical. The bumbling Barney Fife deputy is the complete opposite of Derrek MacMohan, showing little intelligence and no redemption. It’s not even comically enjoyable bad.

A small crew headlined by a legendary actress in a limited setting with a simple story is the perfect recipe for making a low budget film. Sam Farmer shows that he knows how to get indie filmmaking done. The concept is an excellent one. I love the throwback cover that befits this throwback film. The title sounds like it comes straight out of the 1970’s which stands out in the best way against mill titled modern day films. I understand that the bad men of this film are supposed to have a modern day retro feel as well. This isn’t completely a grindhouse feature though and for me the comically bad characters were just too far out of place. My biggest disappointment however is the lack of love for Lynyrd Skynyrd’s 1976 song of the same title but I understand that may not be in the independent film’s budget.

Available May 5th on DVD & VOD