Review of "Penance Lane” by The Headless Critic 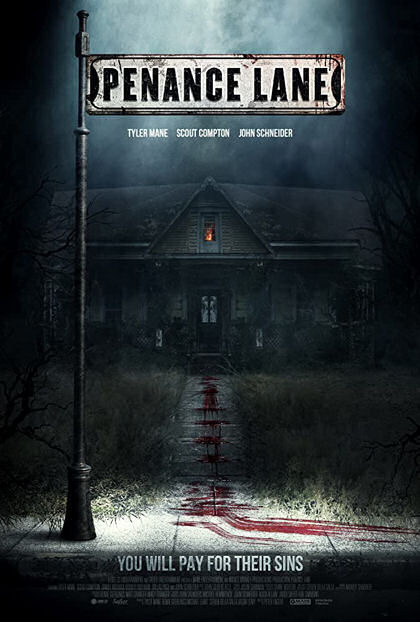 Five years ago at their temporary hideout a crew of criminals headed by Shooter (Booker T) stashed millions away in an abandoned house on Penance Lane. Something within the walls of the dilapidated house took Shooter's crew out and it wasn’t even the police who did it. They came into their hideout with guns, it still was enough. Shooter lost his own brother Bobby (Travis Love) in that house and barely escaped with his life but without any of the money they stole.

Five years later, Crimson Matthews (Tyler Mane) drifts into town. He’s a “big sum bitch” and he just recently got released from prison. The parolee immediately gets into a squabble with Tony (Michael Leavy) who likes hitting on his girlfriend Sherry (Scout Taylor-Compton) until Crimson plays Good Samaritan and stops it. Crimson didn’t know Tony is Police Captain Denny Wilson’s (Daniel Roebuck) son, he also doesn’t really care. Thankful for his help Grits n’ Fixin’s mother and daughter Jan (April Bogenschutz) and Sherry direct their drifter hero to a dilapidated house owned by local pastor, Father John (John Schneider) on Penance Lane where he should be able to find some work as a handyman. Crimson doesn’t know exactly what he’s walking into but that doesn't mean the hardened criminal isn't ready for it.

One of the scenes I love most about John Carpenter’s iconic film They Live is how Nada, played by professional wrestler Roddy Piper, just drifts into town in the opening scenes looking for work. Director Péter Engert duplicates his own version of that with fellow former professional wrestler and star of the film Tyler Mane who drifts onto Penance Lane to find the world as he perceives it there is not quite reality. Mane is a menacing character. The long time actor of many films does well in the starring role.

Tyler Mane isn’t the only professional wrestler in the film. When Crimson calls Hyson (“Diamond” Dallas Page) rides. Though it’s just a small role the connection is nice to see. Page proved his acting chops when cast in Rob Zombie’s The Devil’s Rejects where he shined alongside his partner Danny Trejo. When other fellow former pro wrestler Booker T first hides out in the house on Penance Lane to open the film, he alongside his on screen brother played by Travis Love, stood out in their acting abilities beyond the supposed career actors they were working alongside of.

What’s going on within the walls of the Penance Lane home appear to be supernatural at first as those who enter are dragged off by whatever is living in the house. The look of what lurks inside those walls is frightening. Their Scooby-Doo unmasking is a bit disappointing for me but that is only due to my personal preferences and where I wanted the film to go as the viewer and is no fault of the filmmakers or Munier Sharrieff’s first feature script. Outside of some impressive performances from former wrestlers, Dukes of Hazzard veteran John Schneider is utilized well in the film. I always enjoy seeing Daniel Roebuck and Scout Taylor-Compton may have given my favorite horror performance I’ve seen her in to date. It’s an enjoyable ride down Penance Lane that doesn’t dead end where you might expect.