Review of "Abnormal Attraction” by The Headless Critic

Production by: Fuzz on the Lens Productions
Distribution by: Random Media 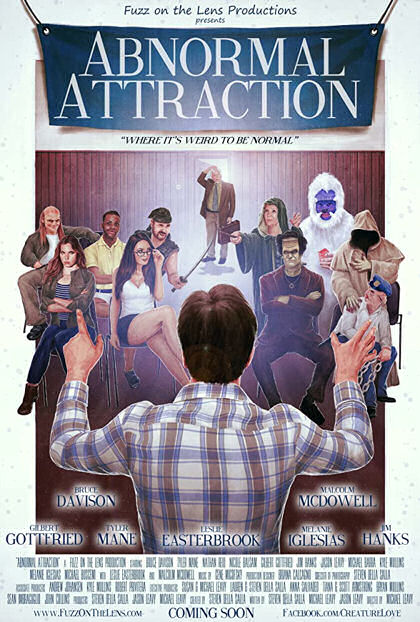 In the beginning God created man, and cyclops, and mermaids, and abdominal snowmen and everything else you can image. In a fairy tale world of mythical creatures and very real monsters, humans coexist alongside every other fairy tale creature imaginable. In a world where every mythical really exists, humans have grown to have some eccentric sexual obsessions. The law of abnormal attraction is told in three connecting parts and we start with…

Chapter 1: Genesis
In order to spend some much needed time with his fiancé Alyssa (Nicole Balsam), Nick (Nathan Reid) agrees to cover Dr. Cole (Bruce Davison) for a week if Dr. Cole will just take his one AA meeting tonight. A week free of leading Alcoholics Anonymous is an offer Dr. Cole can’t refuse so he reluctantly agrees to cover Nick’s meeting tonight. The meeting he's overseeing has nothing to do with alcohol addiction though. Unbeknownst to Dr. Cole, AA stands for abnormal attractions. Dr. Cole learns how far human attraction can go when he finds himself leading their AA meeting.

“If you obsess over them it’ll only ruin your lives.”

Timothy (Michael Leavy) masturbates regularly to the girl across the street, only she isn’t just a girl is she? Catherine (Melanie Iglesias) is a beautiful woman who can have any man she wants but she doesn’t want a man per se. Catherine likes them Irish, under five feet tall who have to climb to get what they need off the top shelf and have an obsession with protecting their gold. Dave (Ed Heavy) has had the same abnormal attraction since he was a child and he awoke to see the drop dead gorgeous Tooth Fairy (Courtney Baxter) coming for what he keeps under his pillow. Since then he’s been trying to get her to come back for what he keeps in his pants. Bella (Renae Geerlings) seems obsessed hearing about others abnormal obsessions. Johnny (Johnny Collins) only has sex with Quija boards. Ann (Lesleh Donaldson) keeps her abnormal attraction Sanzabar (Gilbrando Acevedo) cramped up in a tiny little lamp in her purse. And Ted (Dared Wright) doesn’t have an abnormal attraction but he’s here for his brother Ned (Dared Wright) who lost his life to his AA. Ned was bald, bald everywhere, even more bald than his brother Ted. Ned's obsession was with anything that could grow hair, including Sasquatch (Jack Norman).

Chapter 2: Exodus
On his way home to spend much needed time with his fiancé, Nick’s car has a meltdown. There’s a full moon out tonight which means all the freaks are out. In a world where every creature imaginable exists the freaks can get quite freaky. Nick refuses a ride from one freak that wants him to sit on his face. Left to fend for himself Nick takes a ride from the next car to come down the Dead End street that seems to have endless motorists. The Abominable Snowman (Michael Barra) in the snowmobile seemed like a nice enough guy but the lesson of this story may be to never take a ride from an Abominable Snowman. Now Nick is locked up with a group of even weirder weirdos held prisoner by the Boogeyman (Malcolm MCDowell) and Madam Hildie (Leslie Easterbrook) and kept guard by a giant, Bernie the Cyclops (Tyler Mane). He should’ve just stayed and held his AA meeting himself tonight.

No animals or fantasy creatures were harmed in the filming of this movie. Except for...

Chapter 3: Revelations
No Indians, No Women, No Blacks, No Monsters. Racism in some fashion always seems to exist. Alyssa’s BFF Finbar (Jason Leavy) is so sweet he tastes like penis. While being a Good Samaritan to a broke down motorist earlier today Finbar stumbled upon a place Alyssa has been looking for. It's there every day for her to take advantage of but Alyssa has never been able to find Morning Wood, Camp Morning Wood that is. Alyssa is seeking vengeance against those who reside there for what they did to her family. Now she’s going to have her chance but they can't go in unarmed. Alyssa and Finbar go to Jamie’s Mother’s (Eileen Dietz) house because a man like Jamie (Kyle Mullins) is ready for anything, except maybe bugs. Together the trio reign down on monsters that run Camp Morning Wood, armed with more than just a rectal fork to fight with. The End of Days have come and not every creature will survive.

"Did you kick me bitch?”

Abnormal Attraction is a three part feature. The film is displayed as an anthology but I love how all the stories intertwine and even though it’s three separate tales it’s also a feature that runs together. Within one of those short stories, Genesis, are several micro-shorts of sexual addictions that are also a lot of fun. While most modern day grim fairy tales hide in darkness co-writer, director and co-star Michael Leavy exposes those mythical creatures in bright colors and vivid light in a cheerful comedy. He also exposes his budget shining light on limited make-up and special effects. If you can’t make your special effects look seamless I’d rather have an Abominable Snowman be a guy in a zip up onesies than anything done halfway right. For onesie effects Abnormal Attraction is top notch!

There are many faces of Abnormal Attraction from vampires, to zombies, to aliens. To play the wide world of mythical characters Leavy scores an array of top talent including Malcolm McDowell, Gilbert Gottfried, Leslie Easterbrook, Bruce Davison, Eileen Dietz, Tyler Mane, Lesleh Donaldson and Ron Jeremy. Where this low budget comedy of horrors couldn’t cast top talent they hire the top talent’s brothers including the brother of Tom Hanks as Frankenstein’s Monster (Jim Hanks) and Steve Buscemi’s brother Michael Buscemi as Adam who clucks like a chicken. It’s fantastic!

A comedy that makes me laugh multiple times is rare and I found it in one of the smartest, dumbest comedies I’ve ever seen Abnormal Attraction. This is the movie that teaches us the difference between Frankenstein, Frankenstein’s Monster, Frank Stein and Frank Stein’s monster. I’d be remiss if I didn’t mention the film’s most comedic and painstaking character of all, Finbar (Jason Leavy). Finbar is the cracked out version of Christopher Meloni’s character Freakshow from Harold and Kumar Go to White Castle. That has to be a compliment since the Freakshow character has remained in my memory for the last sixteen years.

Effects may have been limited but the attention to detail is not. The opening scene reminds of a cult zombie comedy called Fido that showed a 1950’s level society where zombies are kept as pets and servants. To open Abnormal Attraction, a roaming shot of everyday life on a rural streets includes humpty dumpty, the Headless Horseman and Madusa on a date amongst others. All surrounding a pool party cookout with The Creature lurking in the pool. Little touches from a mermaid paperweight to a palm eye mask go a long way. There’s so much attention to detail throughout the film there’s no way you’ll catch everything the first time.