Review of "Come to Daddy” by The Headless Critic 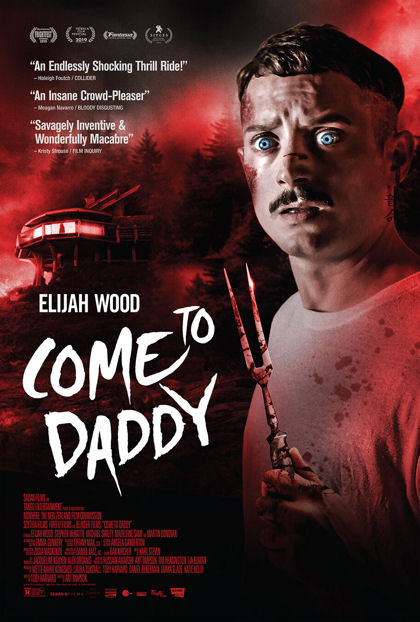 Growing up without a father has taken its toll on Norval Greenwood (Elijah Wood). Even though he’s in his thirties, he’s still living at home with his mother and struggles with alcohol problems. Then one day he receives an unexpected letter from his estranged father asking Norval to visit him. Isolated deep in the woods Norval arrives to his father’s home. His dreams of reconnecting with his Dad (Stephen McHattie) don’t seem to be something that’ll become a reality. His father is so standoffish Norval isn't sure why he invited him at all. Family reunions rarely happen without fighting but this reuniting isn’t what Norval expected at all. It may just be the death of the both of them.

Over the last ten years Elijah Wood has had a string of some of the most unique and quirky roles. Many of which have been made by the actors production company itself. The Lord of the Rings star has proven he really knows how to pick a script. When those films dip into the realm of horror is when they’re the best. Those titles have included Maniac, Open Windows, Cooties and now, Come to Daddy. Each is equally original even though one of them was a remake. In each film Elijah Wood has a standout role. Come to Daddy is another off-the-wall, original horror, thriller where you never know what’s going to happen next.

The writer behind cult favorite The Greasy Strangler, Toby Harvard and a producer behind equal cult favorite Turbo Kid, Ant Timpson, come together to come home to daddy. Elijah Wood plays a pathetic son to his father Stephen McHattie who’s such a strong character he may eventually kill his son. Then everything changes as the film transitions from what you know to what you probably won’t expect. The entire tone of the film is off kilter as the film transitions from comedy, to thriller, to action, to heartfelt drama. It’s a movie worthy of being included for fans of the aforementioned Elijah Wood horror titles. It's an even more impressive first feature for director Ant Timpson and proves writer Toby Harvard isn’t a one greasy hit wonder.