An Evening with Beverly Luff Linn – 2018 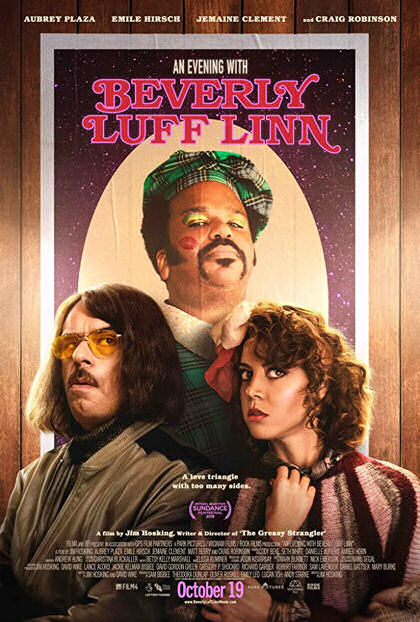 Shane Danger (Emile Hirsch) shits a lot. The biggest shit he’s ever taken was on his wife Lulu Danger (Aubrey Plaza) when he fired her from her job at his cappuccino shop. Shane could have fired Carl (Sky Elobar) or he could have fired Tyrone (Zach Cherry) but no, he fired his wife Lulu. To add to this shit show Shane found out that Lulu’s adopted, vegan, brother Adjay (Sam Dissanayake) has more money in his cash box from his convenience store than Shane has in his cash box selling cappuccino. A cappuccino store he can’t even make enough profit at to keep employing his wife. There’s no way that vegan has more money than Shane in his cash box and to prove it Shane and his two trusted employees are going to rob his brother-in-law.

“Colin who the fuck are you?”

Lulu’s had enough of Shane’s cinnamon bullshit. When Colin (Jermaine Clement) comes to get Adjay’s cash box back, Lulu convinces Colin to steal the stolen cash box from her husband and run off with her. Where is Lulu going to go with a stranger? We’re going on an adventure. Do you like adventures? They're going to the most magical adventure of all. After seeing a tv ad she simply could not resist, Lulu is going to the town’s local hotel for a special event, "An Evening With Beverly Luff Linn (Craig Robinson) For One Magical Night Only". Lulu Danger’s entire life has built to this point, at this hotel, staying with a stranger she just met, at the cost of her unsatisfying marriage, to see Beverly Luff Linn for one magical night only.

“Those nuts have poo on them. You don’t want to eat poo nuts do you?”

If you're wondering what this review of an on the run comedy is doing on a horror site, in 2016 the director and co-writer Jim Hosking created a greasy, little pink film about an old man with a long, deformed penis washing and drying himself naked at the local car wash. Okay, that may not have been the exact premise of The Greasy Strangler but what was created was an immediate cult horror favorite. It was Hosking’s first full length feature film. Based on one film it’s hard to say if the creator is some kind of mentally warped, mad filmmaking savant or if the stars just all aligned for a one hit wonder, greasy masterpiece. The confusing, tongue twister titled An Evening with Beverly Luff Linn is Hosking’s follow-up, second feature. Reader, get a pin and a fucking paper and write this down. Forget Cousin Pooney and watch An Evening with Beverly Luff Linn!

“One of these jets is shooting water up the back of my shorts. It's quite a delicious feeling.”

On the outside this movie looks like a shit shake but take a drink and you’ll find the best, worst dialogue of 2018. It’s sizzlin. Hosking proves his unique filmmaking genius in this equally unsettling comedy with a lot less nudity. Hosking has a way of writing completely unrealistic characters and casting the right actors to play them perfectly. No character is a throw-a-away and no performance is like anything you’ll see anywhere else in cinema. He has a completely unique perspective that stands out in both his features against any other film. I’ve never seen anything like it. His dialogue is dumb brilliance. Just like his first feature The Greasy Strangler, An Evening with Beverly Luff Linn will leave you wondering what the F you just watched and leave you wanting to watch it again. Stick around after the post credits for a little extra Beverly Luff Linn.