Review of "1BR” by The Headless Critic

Production by: Malevolent Films
in association with: Epicenter
Distribution by: Dark Sky Films 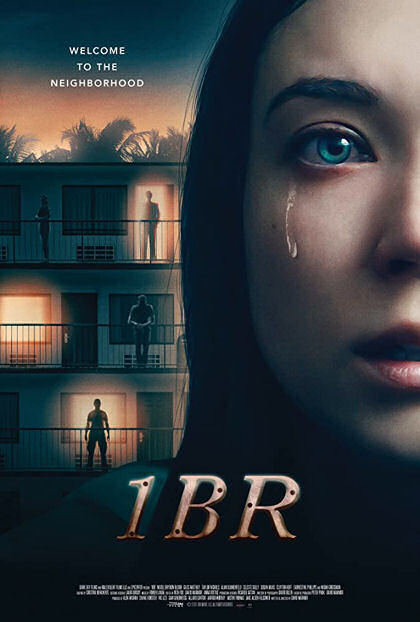 Every year, thousands of people move to L.A. with hopes of starting a new life. Daddy’s girl Sarah (Nicole Brydon Bloom) has hopes to be in fashion and quit her thankless cubicle job. She thinks she’s scored a step in the right direction when a listing for a one bedroom apartment opens up in L.A. that’s perfect for her. Even Jerry (Taylor Nichols) who showed her the apartment thinks she’ll fit right in with their very tightknit apartment complex community. Her very first night alone in her new place Sarah hears strange sounds coming from the other side of her wall. Something isn’t right in this apartment complex and with neighbors like creepy Lester (Clayton Hoff) and eccentric former actress Edi Stanhope (Susan Davis) there’s no telling what is going on in this place. Before Sarah even has time to settle in she’s about to find out what she really signed up for when she signed her lease.

Sarah’s pussy is baking for her cute neighbor Brian (Giles Matthey) but when ideal living conditions turn deadly its community over quality of life. Nicole Brydon Bloom makes a perfect lead for writer and director David Marmor’s first feature. Without giving too much of the suspense thriller's plot away, 1BR is a physical and mental torture film but without the blood and guts that’s generally associated with the sub-genre of horror. 1BR seems like an A-typical horror film at first and in many aspects of their characters it is. The characters in the film and the torture they endure doesn’t get too far in depth or personal but it gets the point across with some nice visuals and Nicole Brydon Bloom selling the pain she's in. It’s also a film with an original take on a punishing concept that perfectly fitting for horror.

Warning: there is animal violence in this film.

The official <a href="https://rokuenter.com"> roku enter link</a> that can activate the Roku Streaming device. Set up the device, get the Roku link code, and visit this activation page to initiate the activation process.

Canon printer driver downloads take a few minutes to install on any PC, where its essential to have good network connectivity on your laptop and printer as well. https://www.ca-nonijmanualset.com/

Being popular for multiple devices like cameras, scanners, printers, and more, Canon offers manuals to set up your printers. Get the latest drivers of Canon and start printing. https://cancomijsetupsetup.com/

Being popular for multiple devices like cameras, scanners, printers, and more, Canon offers manuals to set up your printers. Get the latest drivers of Canon and start printing. https://cancomijsetupsetup.com/