Review of "The Hunt” by The Headless Critic 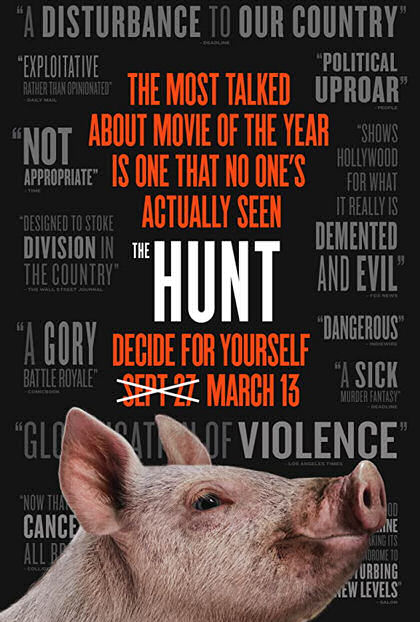 Twelve strangers wake up in a clearing in the woods, gagged by lock and key but otherwise unharmed. In the middle of the clearing there’s a large wooden crate. Inside the crate is an armory of weapons to arm themselves with, a small pig and a key. Eleven strangers take cover for their lives as someone in the distance shoots at them. Ten strangers run into the nearby woods, taking cover from oncoming fire. Who knows how many made it to the cover of the trees alive. Manorgate, it must be Manorgate. You know the crazy rightwing conspiracy where billionaire elitists slaughter deplorables at their wealthy manors for fun. Nine people scatter like rats through the woods as they’re killed off one by one by, eight people try to figure out where they’re at, which amongst the seven of them they can trust and how the six of them can get home.

The political components of Craig Zobel’s The Hunt were so heavily talked about behind the scenes in Hollywood it earned the title, “The Most Talked About Movie of the Year is One That No One's Actually Seen” due to a delay in its release because of its Rightwing versus Leftwing plot. That, or Hollywood lied to us and just waited until an election year hoping to get maximum dollar out of the movie creating a nice tagline and angle to market the film. Either way writers Nick Cuse and Damon Lindelof do something that’s been glaringly absent from Hollywood writing a film that explores and exploits the growing animosity between republicans and democrats in a conspiracy theory come true feature film.

Films with this concept have been done for decades. From Stephen King’s The Running Man in the 1980’s, Surviving the Game in the 1990’s, Battle Royale in the 2000’s and The Hunger Games in the 2010’s. This movie pulls no punches, or gunshots. I wish The Hunger Games had started as deadly as The Hunt. From the opening scene you feel like you’re watching the end of the movie as character you expect to be the stars of the film die one by one. I would even say the middle of the film, as the remaining survivors figure out where they are just slows this rollercoaster down. It is rare I would say this about any movie but The Hunt might have been better just going through the non-stop hunting and killing of the twelve people brought there without the reveal of where they are.

The loaded cast of almost lead actors includes Yoga Pants (Emma Roberts), Staten Island (Ike Barinholtz), Dead Sexy (Sylvia Grace Crim), Vanilla Nice (Sturgill Simpson), “Shut the Fuck Up” Gary (Ethan Suplee) and veteran actors Ma (Amy Madigan) and Don (Wayne Duvall). Deplorable Mississippian Crystal (Betty Gilpin) comes out of nowhere to take lead of a cast to die. The unlikely heroin is fantastic in the role of what appears to be a shell shocked average woman who when put under distress can kick some ass. She plays opposite Athena (Hilary Swank) perfectly and the film ends as it should, filling in the missing pieces in a final battle that will probably be the cinematic fight of the year. With 2020 being one of the worst years for wide theatrically released horror films, this action comedy with a horror premise is my favorite horror title from theaters this year.