Review of "Powerbomb” by The Headless Critic 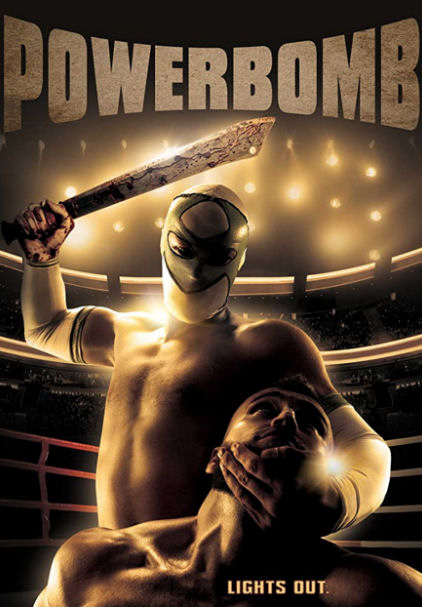 Life is a work and then you die. Lifelong independent wrestler Matt Cross (Matt Capiccioni) is on the brink of being signed by wrestling’s largest entertainment company. He’s been on the verge of breaking through his entire career though. Since his wife Amy (Roni Jonah) retired from wrestling, splitting up their inter-gender tag team to care for their son Cash (Cash K. Allen), his mediocre rise to the top has stalled. His manager Solomon (Aaron Sechrist) seems to spend more money than they make and he definitely blames Amy for both his clients not making it to the network yet and taking money out of his pockets.

No one knows how successful Matt should have been more than his biggest fan Paul (Wes Allen). Paul is such a Matt Cross fan he’s waited to meet him backstage after a show when everyone else has gone home. Finally getting to meet his idol doesn’t go how Paul dreamed it would but he’s not giving up on his hero. In fact, Paul’s decided to kidnap Matt Cross and push him to become the star Paul knows he has inside.

Co-writers and directors B.J. Colangelo and R. Zachary Shildwachter and writer and co-star Wes Allen utilizes an array of professional wrestling talents to tell the story of an obsessed fan kidnapping his favorite wrestler and holding him captive, chained to the wall of his mom’s basement. It’s The Fanatic movie for pro wrestling and we know how much flack that film got. It’s not technically a well-made movie with sound, lighting and cinematography issues. It’s a film that mostly wrestling fans and grindhouse horror fans will enjoy. A film full of wrestling shirts lacks on runtime and still opened with a full five minute wrestling match to intro into the film. Powerbomb will probably go down as having the worst cover of any movie I review this year. It’s generic and besides having a wrestling theme it has nothing to do with the film itself. All of that said, for a no budget, grindhouse, wrestling horror film, it’s actually entertaining and fun but it is missing a finishing move to put it over the top.

The cast is mixed with professional actors and professional wrestlers who give mixed performances. The good and bad performances may not come from who you might expect though. Most of the professional actors in the film overact while it’s actually the wrestlers who largely give true to life roles. Real life wrestler Matt Cross is an interesting character. The young, silver haired fox with the look of a hipster and a body chiseled out of granite may need more experience before being cast in a lead role but he’s naturally intriguing and gives a formidable, finger biting performance. The best actors in the entire film though come from fellow pro wrestlers. “Super Cop” Dick Justice (John Taddeo) has a small role playing his real life in ring persona. He has fun with his part delivering over-the-top dialogue naturally with ease. The supporting role of Kelsi Roxx (Britt Baker) stood out as the best performance of the film. Not only is her limited character the most interesting of the movie, Baker also has acting chops knocking the role out of the park, or ring in her case.