Review of "VFW” by The Headless Critic 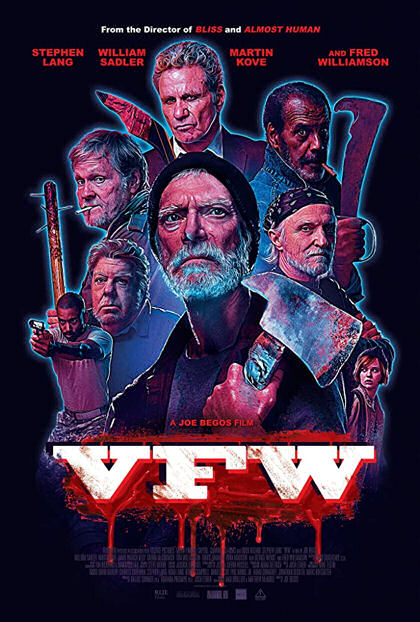 The VFW is a place for veterans of foreign wars to come together with their own, relax among others who have been through war, smoke, drink and gamble if they want to. They also do a lot of good for their fellow veterans and local communities. Just when Fred (Stephen Lang) was thinking about closing the bar for the night and join his buddies Walter (William Sadler), Abe (Fred Williamson), Lou (Martin Kove), Thomas (George Wendt) and newcomer Shawn (Tom Williamson) at the local strip club, this VFW is asked to go above and beyond for a little Lizard (Sierra McCormick) who stumbles in through their front door. Behind the little Lizard is an army of drugged up punks led by their dealer Boz (Travis Hammer) and he wants his drugs back Lizard stole. It’s time for the veterans of this VFW to take up arms and go back to war, a street war of Vets versus Mutant Druggies.

A stellar cast of veterans have a smashing hit in director Joe Begos’ follow-up feature to one of my favorite horror films of 2019 Bliss. I love the concept from co-writers Max Brallier and Matthew McArdle which opens the door to utilize underused veteran actors. Stars, Stephen Lang, William Sadler, Fred Williamson, Martin Kove and George Wendt are great to see stepping outside of their familiar roles and killing some mutant druggies! The concept for the film is amazing. More filmmakers should follow suit and give such talented actors good roles like this.

One thing I rarely approve of is artistic color correction in film. VFW works in darkness, lit with mostly reds and blues. There’s an unreality to such color correction I don’t personally enjoy and I largely consider it an artistic expression that hurts the reality of films more than it helps. That being said Begos last film Bliss had a similar use of lighting and it was one of my favorite films of the year. VFW is a darker, grindhouse feature where such lighting is more commonly used.

The Mutant Druggies of the film are excellent. A vast array of menacing character bring back memories of the best of 1980’s TROMA films in the best ways. The real star of the film are the five stars, Stephen Lang, William Sadler, Fred Williamson, Martin Kove and George Wendt who shine in their kick-ass roles. Don't mess with these grumpy old men. Not every veteran survives this war and it’s just as entertaining to see them die. Norm Peterson gets off his bar stool for once and puts up a fight. The Cobrai Kai Sensei and Avatar bad guy take on a different kind of enemy. Grizzled ass kicking vet Fred Williamson, well he’s probably faced situations like this before. VFW is exactly what you’d expect to get, a lot of fun.