Watching Movie - Blood On Her Name

Review of "Blood On Her Name” by The Headless Critic 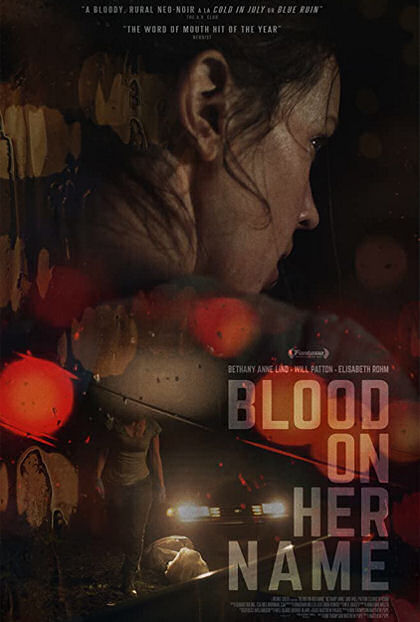 Battered and bruised Leigh Tiller (Bethany Anne Lind) gets to her feet having just killed a man. A single mother to a troubled teenage son on parole Ryan (Jared Ivers) she cannot go to prison for this. Ryan’s father is already in prison. To make things worse Leigh’s dad Richard (Will Patton) is a local police officer. Leigh panics. She finds herself alone on the lake, in a boat with his body wrapped in a tarp. The phone of the man she killed rings. It’s his son calling, wondering why his father Darryl (Tim Hughes) isn’t home. He has a son just like she does. Leigh can get away with this murder right now by tossing his body over the side of the boat but the conscious can be more punishing than the criminal justice system. When Leigh decides to anonymously return Darryl’s body back to his family everything starts to unravel including her mind.

A dark and tragic tale, director and co-writer Matthew Pope’s first feature film is a downward spiral of bad decisions in the life of a struggling mother trying to hold onto her family for her son. This down to life, suspense thriller touches on what reality is for the majority of Americans more than most things coming out of Hollywood can come close to. A film heavy on story and performances as independent films should be, it’s a family drama centered around a split second decision that led to murder. Bethany Anne Lind plays a pill dependent, fringe criminal, single mother, convincingly well making Leigh Tiller a likable character in every bad decision she makes. As always Will Patton is fantastic. A slow continuous build where every move matters, ends where you probably wouldn't expect.