Review of "Snatchers” by The Headless Critic 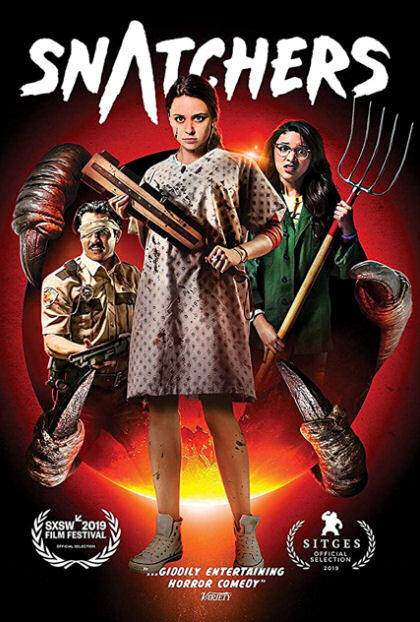 Since her boyfriend Skyler (Austin Fryberger) returned from his trip to Mexico he hasn’t been the same. Sara (Mary Nepi) and Skyler agreed to wait but now he needs something more. Even though she’s not ready for sex Sara is obsessed with her social status and there’s no way she’s going to let Skyler go. I mean, his tan is even better since getting back from Mexico! After her very first time having sex, which only lasted about five seconds, Sara got pregnant. The very next day she woke up nine months pregnant, literally. You can’t hide this belly and she’s not telling her mom Kate (J.J. Nolan) who thinks Sara is still a virgin. The only person who might help her isn’t her overnight baby daddy, or her current best friend Kiana (Ashley Argota), it’s her former BFF Hayley (Gabrielle Elyse) who Sara kind of forgot in as she became more popular in high school. Hayley takes Sara to a clinic where the overnight mommy to be proceeds to vagitate all over everything, shooting out an alien baby that looks like a lobster. The two teen girls must stop the killing spree Sara’s darling alien, lobster baby embarks on and figure out how to get the other alien that’s still living inside Sara out. Teen pregnancy, it’s a monster.

WT Fuck did I just watch? Writing, directing, movie making trio Stephen Cedars, Benji Kleiman and Scott Yacyshyn give birth to something a lot prettier than an alien, lobster baby in the trio’s first feature film. Continuing in a long line of excellent horror comedies released last year, Snatchers is the first I’ll recommend as a must see for horror comedy fans in 2020. The comedy is admittedly juvenile with their ancient Egyptian hieroglyphic erections. The film has fun though, which goes a long way in modern day filmmaking as you can see the passion behind the project come through on screen. The dialogue is also excellent, some of which you’ll find plagiarized for this review. Don’t let this film slip past your bat echolocation or whatever you use to track your siblings so you can have sex with them. Watch the movie to understand the meaning behind that statement.

With a legitimate budget behind it, production values are top notch. A practical monster, a lot of blood and a little bit of vag-juice goes a long way. There’s no bad CGI here. Snatchers has a wonderful assortment of up and coming actors who play their spoof characters perfectly. My favorite character not mentioned so far is Officer Oscar Ruiz (Nick Gomez) who may have sacrificed an eye for this production but at least gets a mention in my review which makes it all worthwhile. Mary Nepi headlines the cast and while I may have enjoyed her the most in her lead role, I’ll say this better be the last time I see her butthole tonight because it’s all throughout the film. Most satire level comedies struggle finding the right comedic level with over-the-top roles but Dave (Rich Fulcher) is the correct amount of comedy while roles like Kate Steinberg (J.J. Nolan), Dr. Friedman (Mark Stande) and Blair (Amy Arburn) play it serious with a wonderful cast of supporting cops and teens to die. Plus there’s a fantastic exploding head and we here at the Station of Decapitation WithoutYourHead.com always approve of a severed cranium. For a film that was off my horror radar I was highly impressed.