Review of "Human Zoo” by The Headless Critic

Production by: Seymore Films, The Maine Studios
in association with: The Golden Zephyr
Distribution by: Wild Eye Releasing 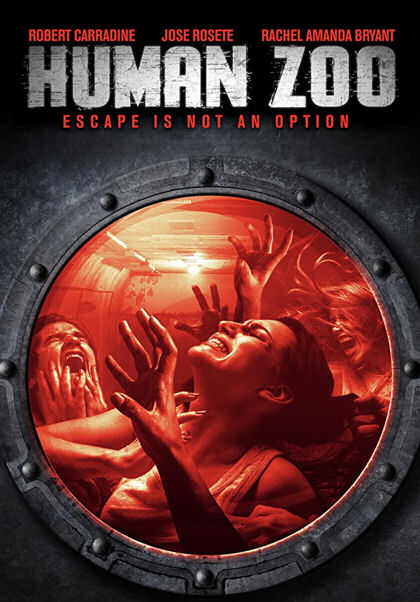 In the Spring of 2017 a nationwide casting call was announced for a new reality show. It will be the first ever 24 hour live streaming web series. “Solitary Confinement” would place each contestant in an 8x8 cell and broadcast them live over the internet. The competition continues until all but one contestant quits. The remaining contestant will then be released and will earn the $1 million prize. Potential contestants are given almost no details about the actual show, including the total number of contestants. How far can one person push themselves for to walk away with $1,000,000?

Why do you think you should be cast in Solitary Confinement? Like many others, Contestant 113 (Kristyn Evelyn) is just in it for the money. Contestant 1018 (Jose Rosete) wants to get a sports car, move to Miami and tell everyone he knows to eat a dick. Contestant 2018 (Trista Robinson) would use the million dollars to take care of her cat David who’s her special boy, to add to her snow globe collection and to hopefully not die alone. Contestant 183 (Robert Catrini) chose this game show because he isn’t good at answering the questions other game shows ask. Winning may be his only chance he has to get his wife the two operations she needs that they can’t afford even with their insurance. Contestant 1013 (Jordan Mitchell-Love) is drawn to letting an outside entity like the game show take over control of his everyday life. Contestant 184 (Robert Damian) wants to face himself alone in Solitary Confinement with no one else around and nothing but his thoughts.

“Hey, um could I just get some like saltines if you don’t have medicine? Like just some saltines or some 7-Up or some tea or some blanket. Is this breaking the rules?” – Contestant 2018

Those selected, find themselves alone in an 8x8 room with no way in and no way out. A camera in the corner watches them. Their number is on the wall. There’s a mat on the floor to sleep on and a bucket in the corner to be used as a toilet. They are routinely given bland food and bottled water. This is their only existence. There’s no way to tell time or how long they’ve been there. The only one to talk to are the viewers they assume are watching at home. The only entertainment is their own thoughts. It doesn’t take long for the lines of reality to break and that break is only the beginning. There are only so many times you can count the nails in the walls. The way out may not be as easy as they thought it would be when they stepped inside this Human Zoo.

“I’m just smelling my own shit. It’s saying something when the smell of my own shit has become quite endearing actually. Just a normal thing, just like oh yes what’s that, that’s my own shit, it’s great.” - Contestant 58

What begins looking like another typical, low budget horror movie complete with audio issues, evolves into a performance based experimentation in mental torture.
Contestant 18 (Ally Holmes)
Contestant 58 (Edward Hong)
Contestant 84 (Heather Dorff)
Contestant 103 (Jessica Cameron)
Contestant 113 (Kristyn Evelyn)
Contestant 182 (Rachel Amanda Bryant)
Contestant 183 (Robert Catrini)
Contestant 184 (Robert Damian)
Contestant 1013 (Jordan Mitchell-Love)
Contestant 1018 (Jose Rosete)
Contestant 1043 (John D. Crawford)
Contestant 1212 (Loren Ledesma)
Contestant 1312 (Megan Le)
Contestant 1812 (Raw Leiba)
Contestant 2018 (Trista Robinson)
are unleashed within their confines to create as much drama, terror and comedy as they can. The Human Zoo is limited only by its inhabitants and several of these thespian animals break free from their cages. It’s a dramatic improve exhibiting each actor’s prowess. Robert Catrini gives what may be the most realistic, reserved under the circumstances, performance of the film. It’s the realistically eccentric roles that excel though. While Contestant 1812 (Raw Leiba) smears shit on the walls, Contestant 58 (Edward Hong) delves into an intellectual conversation with himself on the essence of his own aroma. My favorite performance, from sane to insanity comes an actress I’m increasingly impressed by, Contestant 2018 (Trista Robinson). Trista brings the biggest laughs in her opening interviews, she escalates the films feel evoking the most peril as their situation becomes real and she gives us the most complete conclusion of any character’s fate. She’s also the most quoted in this review.

“What if I got my period would you bring me a tampon? I feel like you would have to, like legally. This is a show right?” – Contestant 2018

Director and co-writer John E. Seymore creates a unique film with a concept that perfectly fits low budget filmmaking as well as giving talented and underutilized actors a platform to display their skills. I enjoy the film based on what appears to be mostly improvisational acting from sane to insanity by the cast. The film successfully builds increasing volatility while giving us several performance gems. With an open ending, the film does feel like a concept that never comes to fully to completion, leaving me wanting a little more story to go along with these great performances.