Review of "Wrestle Massacre” by The Headless Critic 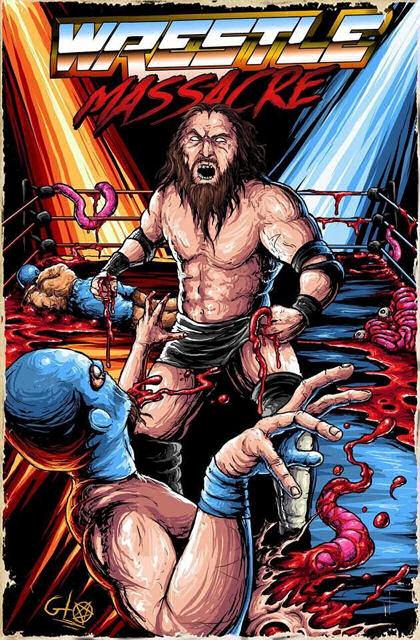 Professional wrestling fans are a special group of people and Randy (Richie Acevedo) may be the most special wrestling fan of all. Like most fans, Randy has unfulfilled dreams of living his meager life between the ropes as a champion, inside the ring alongside his boot and tight wearing heroes. Instead of living the wrestling life Randy works a lowly gig as a groundskeeper who’s consistently talked down and humiliated by those who employ him. If he has one client who treats him well it’s Becky (Rosanna Nelson) but her man Owen (Julio Bana Fernandez) has problems borrowing money from people he can’t pay back. Fifteen thousand dollars in debt and certainly no money to pay Randy for the work he’s done, Owen owes the last person in town you'd want to be indebted to, Mr. Valentine (Nicholas Yoder II). Mr. Valentine’s top enforcer is a Canary Mastiff who always sees red. Jackie (Jimmy Flame) is a cheese slice single eating, madman who does Mr. Valentine’s dirty work. As Jackie and his crew come for the money Owen owes Mr. Valentine, life comes crashing down and it hurts inside for middle-aged Randy as he realizes his limitations in life when he reaches for his dream only to be rejected by a local wrestling school. There's only so much on man can take before he snaps. This isn’t a wrestling success story, it’s a Wrestle Massacre. “You can't tap out when you're dead!”

The Boogie Woogie Man Jimmy Valiant started it all… When he’s rejected from wrestling school, a squashed, Bruiser Brody wannabe wrestler who takes shit for a living finally has his mental break, dons his wrestling trunks and begins wrestle massacring everyone! With the greatest opening in cinematic wrestling history, Wrestle Massacre brings the boobs, butts and gore! The opening of the film is fantastic. Besides including our Killer Kowalski, it has little to do with the rest of the movie but I don’t care because a naked girl running through the woods from a killer professional wrestler is a face grabbing attention getter. The gore that follows is top notch practical effects done amazingly well in a budget film. The dialogue throughout the film is highly unrealistic but at times excellent, most of which is delivered by Jackie (Jimmy Flame) who has a guy on his squad who will dry swallow three Viagra before paying you a visit if you owe Mr. Valentine money. I don’t know which one of Jackie’s crew pops Viagra before collecting debt but I bet it’s Kendo (The Sandman). A few great lines are saved for real life pro-wrestlers Tony Atlas and Nikolai Volkoff that are definitely something wrestling fans should check out. Mr. Valentine (Nicholas Yoder II) also delivers good dialogue in what may be the film’s most realistic performance.

There’s plenty in Wrestle Massacre that can be improved upon including sound, editing, acting and cinematography but what this indy feature lacks in filmmaking basics it makes up for by ripping a man’s head off with a camel clutch humbling them in true Iron Sheik form. Director and co-writer Brad Twigg has fun with this film which goes a long way. Several active and retired professional wrestlers are scattered throughout the film including Rene Dupree, The Sandman, Manny Fernandez, Tony Atlas, Jimmy Valiant, ODB and several independent wrestlers. There’s several lines and homages only wrestling fans will get, a great scene with Nikolai Volkoff, Rene Dupree has a substantial role and Richie Acevedo just looks like a wrestler who would go savage and hunt naked women in the woods. It’s a fun watch that both wrestling fans and low budget horror fans should enjoy. Just don’t mix mustard and chocolate syrup in real life.