Watching Movies - You Should Have Left

Review of "You Should Have Left” by The Headless Critic 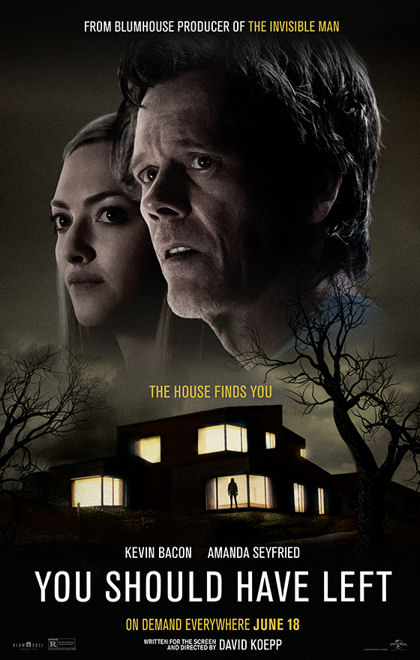 With a dark cloud still hanging over him in the public eye after his first wife’s controversial death several years ago, Theo Conroy (Kevin Bacon) stands barred from a closed set as his much younger wife Susanna (Amanda Seyfried) does a nude scene in front of who knows how many people. Listening to his wife’s moans of ecstasy in the distance as she simulates sex with a younger man strikes jealousy in Theo's heart. Along with their six year-old daughter Ella (Avery Essex), the couple take a much needed vacation to the remote Welsh countryside to reconnect after Susanna’s latest role. Miles from civilization strange things begin to happen in the house. Are the strange things happening in their rental home paranormal or are the rumors about Theo Conroy killing his first wife true and now his family is trapped miles from civilization with a madman?

Based on a novel from Daniel Kehlmann, screenplay writer and director David Koepp is reunited with his Stir of Echoes star Kevin Bacon for Koepp’s tenth feature film. Like Koepp’s previous horror films Stir of Echoes and Secret Window, there’s memorable scenes that hint at brilliance but are never fully fleshed out. Excellent scenes of Theo realizing the house they rented measures differently from the outside than it does inside, and the walk he takes with his daughter leaving the house in the middle of the night are truly creepy but neither scene is given the time for a mystery to be meaningful. There’s also the man who may live in the house which turns out to be laughable when what’s really happening is revealed. I could see these scenes being expanded upon in a novel, which they probably were. For the feature, these scenes aren’t given the time or importance to matter to the audience. Blumhouse fails again. Perhaps you should have left more of the book in your film. The creepiest part of the movie is the casting of Kevin Bacon opposite Amanda Seyfried who are not believable at all as a couple and their thirty-plus year age difference.