Review of "Becky” by The Headless Critic 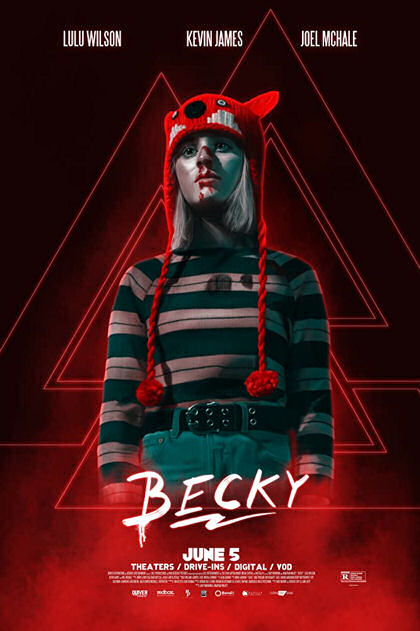 There once was a little girl who lost her mother. Years later, thirteen year old Becky (Lulu Wilson) has increasingly grown estranged from her father Jeff (Joel McHale) as teenage girls sometimes do. The distance between father and daughter has increased along with Becky’s rebellious behavior since her dad starting dating his new girlfriend Kayla (Amanda Brugel). Becky is thrilled when she finds out they’re going to the lake house she often went to with her parents before her mom died even if Kayla and her young son Ty (Isaiah Rockcliffe) are coming too. When they arrive, Becky’s Dad announces the reason they’re visiting their lake house in the woods he wanted to sell just months ago. Her father’s announcement is the worst news Becky could ever had imagined but there are convicts lurking in the woods around their getaway home that are about to make this day worse. Even the most hardened, criminal killers will have their hands full with a pissed off teenage girl.

From the directors of the underappreciated 2014 action, horror comedy Cooties, Jonathan Milott and Cary Murnion return to horror with a more serious tone, keeping their creative, outside the box eye for filmmaking. Becky isn’t the cookie cutter home invasion movie nor does it follow the directive you expect the film to take.

Lulu Wilson is excellent in her starring role. A couple of comedians in Kevin James and Joel McHale take serious roles of criminal and victim. Joel McHale has proved himself capable in a variety of roles that he can pull off as long as he has a hint of a jerk in his character. Skinhead, bad guy is a bigger transition for James. Visually Kevin James impresses, looking the role although fake Hollywood tattoos are much like CGI fire or liquid and just don’t quite look right. After years on television on a show I didn’t even watch, Kevin James has a built in likability that doesn’t easily transition to bad guy. Perhaps it’s just his personality or limited acting prowess but something in his character isn't enough. Robert Maillet however, who usually plays a straight up henchman or fight scene bad guy, comes out of his enormous shell showing he can do more when given a layered role.

Becky is a fun watch that plays between home invasion horror, revenge action and teenage action in the line of Kick-Ass. The film largely succeeds with Lulu Wilson's character and Jonathan Milott and Cary Murnion who continually impress with their directorial eye and unique execution of script.