Review of "Vivarium” by The Headless Critic 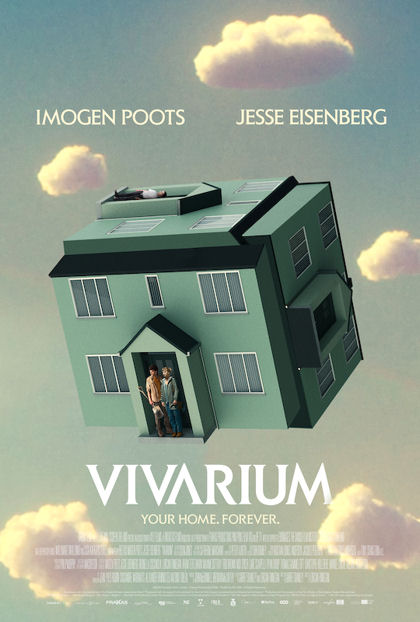 Young couple Tom (Jesse Eisenberg) and Gemma (Imogen Poots) are looking for a starter home where they can start a family together. Their search brings them to a real estate agency with an unorthodox if not effective salesman. Martin (Jonathan Aris) convinces the couple to follow him to one of their subdivision properties against reluctant Tom’s desire to not live in a mass produced, cookie cutter home. Down every street, at every turn, everything in the housing development looks the same. Even the clouds are picture perfect. Green houses line endless streets, none of which seem to be inhabited. Then they stop at number nine. The house is no different than number eight or number ten other than it's number nine. Before their tour of the home is finished, the couple venture off to themselves briefly and when they turn around their kindly but strange host Martin is gone. When they check outside his car is no longer there. The couple, were being polite by continuing to tour the property they were sure they didn’t want to buy, are free to leave. Getting out of the vast maze of a housing development where every street looks the same is easier said than done and everything seems to be bringing them back to house number nine. Welcome to your home forever!

The second feature film of director Lorcan Finnegan is a starter home nightmare of a different sort. Everything about this feature screams a twilight zone mystery but done in a modern style of filmmaking. This isn’t a dark and dreary horror film. It’s a bright, vibrant and happy feature that will scream until you feed it. By the time you realize this isn’t the life you want for yourself, you’re stuck with a family you have to raise and support. It’s a brilliant commentary, intentional or not, on the typical life lived by most people who dig a hole in their front yard seeking freedom without realizing they’re burying their lives in their own hand dug grave. The talented Imogen Poots and Jesse Eisenberg play their roles well as reluctant parents to be to the ne'er-do-well Boy (Senan Jennings). It’s Martin (Jonathan Aris) and the shared role of the Boy by Senan Jennings and Eanna Hardwicke that take this movie from a mystery to a truly creepy film. Though nothing is as creepy as the reflection it mirrors on our own lives. Vivarium isn’t like the streets it’s set on of cookie cutter house after cookie cutter house. Lorcan Finnegan breaks out of the Hollywood mold with an original idea and methodical and unorthodox execution.