Review of "Fried Barry” by The Headless Critic

Production by: Enigma Ace Films, The Department of Special Projects 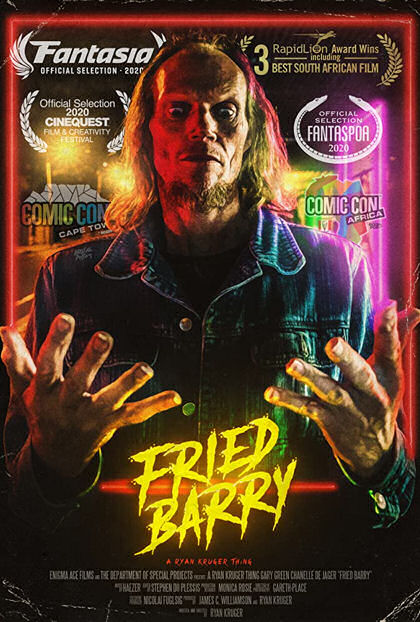 "When you watch this film you need to be sure that it’s suitable to the audience around you. This film has been classified eighteen which means it’s for adults only and no one else. It’s an offense for anyone to supply this film to anyone under that age. Eighteen films may contain explicit language, nudity and strong scenes of high impact sexual violence which could be graphic and disturbing to those at home. Certificates are there for you to make the right choice and to inform others to have knowledge of the film before viewing. Thanks for listening and enjoy the film."

Barry (Gary Green) is a shit excuse for a father. He doesn’t feed or clothe his son and according to his child’s mother Suz (Chanelle de Jager), he doesn’t love his son either. Barry claims the child doesn’t even look like him. After a fight with Suz, Barry takes to his second home, the streets where he’s free to drink and do drugs without the nagging of the woman who always takes him back in. High on heroine Barry follows bright lights in the sky until he’s abducted by aliens, or at least thinks he is. Probed in every orifice of his body, Barry returns, wandering the streets in a drugged fueled penilely probed night of sex, nightclubs, prostitutes, castrations, impregnation and a lot of starring quietly at everything. This is only the beginning.

Barry exists on a multi-day high of unreality. Gary Green is the most realistic street wanderer I’ve seen in cinema since Frank Meyer in 1996’s Bride of Frank, whom to this day I am convinced, is an actual homeless person. Ryan Kruger’s first feature is right up my alley of unorthodox adventure. It’s done so in a slim city aspect circa 1980’s New York City that would make Joel Reed and Troma proud. It’s the best binge drug addict being abducted by aliens and going on an adventure film I’ve ever seen. It is simply good, entertaining trash cinema.