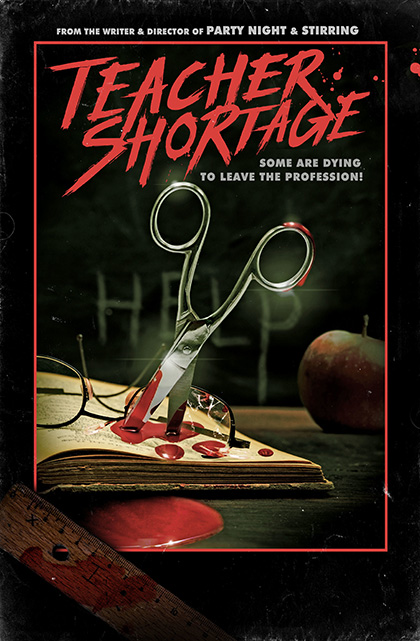 It’s tough to be a teacher today. Underpaid, undervalued, disrespected by your students, and overworked, you have to deal with trying to educate America’s youth while navigating the politics of quotas and a gazillion rules diametrically opposed to any productive mentorship.

Oh, and there’s a masked serial killer offing you and your co-workers.

Yeah. THAT’S tough all right, and it’s the premise of Troy Escamilla’s Teacher Shortage, a gaudy, gory, and fun ode to the classic slashers of decades ago.

Prescott High is just like any typical high school in America except, ten years prior, belittled and bullied student Brenda found herself pushed to the breaking point. Eternally tagged with the title “skank” under her picture in the 2010 Prescott Yearbook and finding little to no aid in defense from her teachers, she decides to take her own life.

Flash forward to today where we join a gathering of the members of Prescott’s English Department. Leading the pack is the flinty and bracing department head Sue (WYH fav, Debra Lamb). She’s called a meeting of her peers; jaded and weary James, perky but judgmental Alice, handsomely cocky Brandt, whiny Valerie, and progressive-thinking Lauren. There’s also Prescott’s newest teacher, the young and idealistic Ryan, who is secretly having a relationship with Prescott principal Michael.

Missing from this tete a tete is Kathryn (genre stalwart Brinke Stevens), who is attending a contentious parent-teacher conference. Katheryn soon finds that annoyed, angry parents are the least of her problems.

The rest of our faculty group later convenes at Sue’s house for an evening of wine and teambuilding. After the wine begins to get the best of some of them, our devil-masked killer starts getting the worst of all of them, one by one. Drenched in giallo-style red lighting, the murders are gruesome and classic, with everything from sharpened rulers through the head to gore-faves machete and eye-violence. You’re not here for plot and character development, you’re here for the body count, and Teacher Shortage provides no shortage of that.

But indeed, where Teacher Shortage and Escamilla’s script does rise above the rest is by providing us with distinct, quirkily unique characters. Several of the actors, in particular, bring their roles to notable life (before some quite ceremonious deaths, of course!). The eager, bright-eyed Ryan, torn between his affection for Principal Mike and his lifetime dream job, is wonderfully embodied by Chris Jehnert. Also of note is Roger Conners as the object of his interest. There’s a great scene between Lauren and Brandt that allows Kaylee Williams and Michael Tula to shade their characters with far more would typically be expected in your usual slasher pic. Tula especially stands out as a talent to keep an eye on. Exceptionally keen horror fans will also spot numerous other horror veterans of yore, besides Stevens and Lamb, in small roles throughout the picture.

Will Teacher Shortage join the ranks of My Bloody Valentine, The Burning, and other classic slashers we have come to love over the years? Maybe not, but it might scratch an enjoyable, blood-splattered itch for many of you out there.

Oh, and stick with the credits for a few…