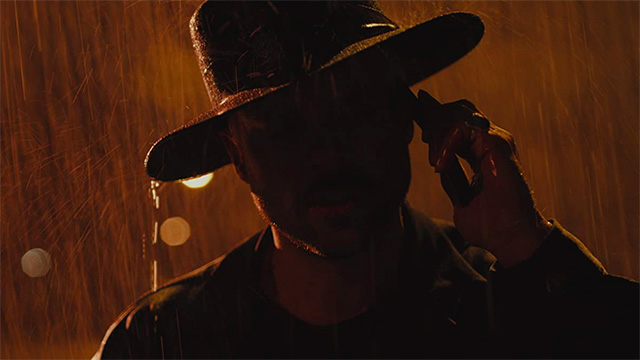 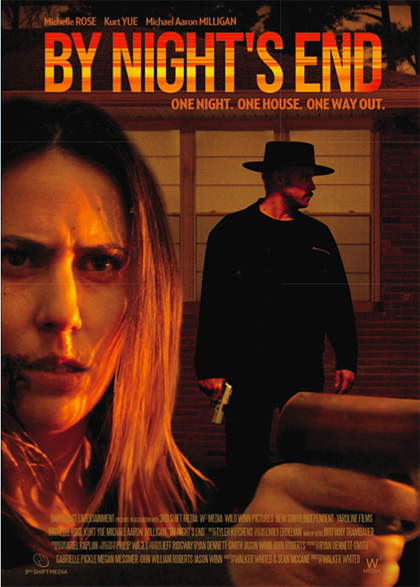 Home invasion gone wrong has been the basis for many movies. Panic Room, The Purge, Hush, Don’t Breathe, Home Alone… Probably one of the most classic films is 1967’s Wait Until Dark, with Audrey Hepburn as a blind woman terrorized by a group of criminals looking for a doll that hides a stash of heroin. By Night’s End is possibly closest to that film in its most basic concept. But classic, it isn’t.

Heather and Mark are a troubled couple, living in their newly purchased home. Heather is an Iraq vet saddled with PTSD and in danger of losing her job. Mark is out of work, struggling with insecurities about his masculinity concerning his ex-soldier wife, and blaming himself for the circumstances of their daughter’s death, a tragedy that plagues them both. Sound like a lot with deal with? It is—for both of them, and us.

On the night of the title, these two find their already convolutedly troubled existence made even worse by the arrival of Parker, a two-bit thug who, two months previous, hid something of value somewhere in their future home. Caught by a pistol-wielding Heather, Parker tries to bargain, offering them $10K if they will let him go, along with the object of his search. When Parker makes an unexpected move, Heather shoots and kills him.

At this point, Mark and Heather begin to make some of the dumbest and most unrealistic series of decisions ever put to film.

Rather than just call the cops, fess up to shooting an intruder in self-defense. Believing it might solve their financial issues, Mark convinces Heather that they should delay contacting the police to look right now for whatever Parker had hidden. Having found nothing before their one-hour deadline for midnight, they call 911 anyway. While waiting for the police’s arrival, they discover a 2-way radio on Parker’s body and, with it, that he was not operating alone. The voice on the other end of the radio belongs to Moody, the colorful and flamboyant leader of the night’s mission. When Moody kills the responding police officer (in a manner almost bordering on ridiculous), Heather and Mark believe that they will be held accountable for his death as well, and this again initiates a series of absolutely bonkers moves and reasoning on both their part.

There is SO much in By Night’s End that will cause even the viewer to wonder WTF Heather and Mark must have been smoking before going to bed that evening. Sadly, it seems that Moody and his gang had sampled the same stuff because no one in this film follows any sort of logic that would be plainly evident in the real world. Now I certainly don’t mind a film that breaks from reality to form its own rules and story “physics” (an example—also featuring a home invasion gone awry—that does this superbly, is John Wick), but please, folks... Between Heather, Mark, and Moody, the number of artificially manufactured problems and conflicts of the character’s own creation fast becomes overwhelming. The two repeatedly mention ending up “behind bars” due to Parker’s initial death, but everything they subsequently do directly endangers their very lives. Coupled with this are long breaks in the action where the pair either argue or flirt oddly with one another (especially given the circumstances). We sometimes feel this late-night break-in has interrupted a couple’s counseling session.

Beyond the pervasive lack of judgment repeatedly exhibited and the over-the-top arsenal of tricks our bad guys seem to pull out of nowhere, the plot points, particularly the McGuffin our gang is searching for, lead to nowhere. Midway through the film, Heather asks her spouse, “What are we doing?” Sadly, that’s what this reviewer was asking himself as well.