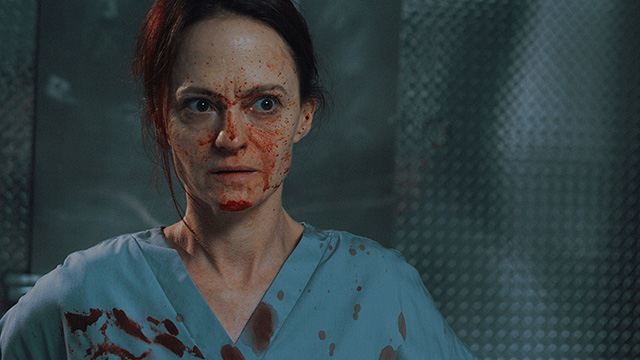 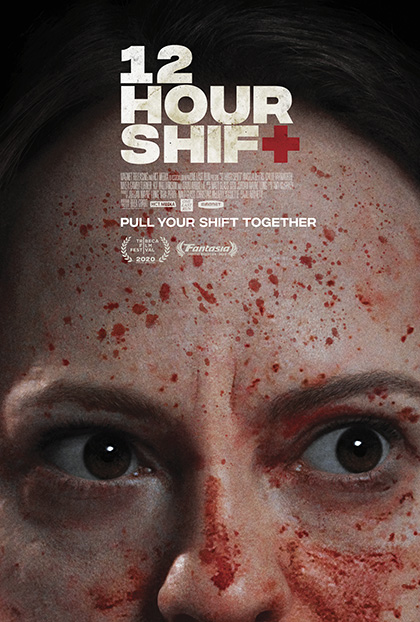 When you owe that kidney to the mob, that REALLY sucks.

If that sounds a bit whacked, well, you haven’t heard the half of it. If that sounds fun, then 12 Hour Shift is gonna be your drug of choice.

The iconic Angela Bettis is Mandy, a nurse at The Local Hospital (yes, that’s how its identified in a newscast in the film!). Mandy is like many nurses working those late-night rounds, weary and worn down, with a dry, seen-it-all attitude. But unlike many nurses (I hope), Mandy, along with co-worker Karen (Nikea Gamby-Turner), has a side business peddling black-market organs for transplant. Oh, and a pretty decent drug habit, to boot.

When the kidney in question is accidentally left behind at the hospital by dumb as a fencepost organ-mule Regina (the wonderful Chloe Farnworth), things start to get… weird? Weirder. Throw into this mix the oddball patients who might be found overnight at any hospital. Then on top of this, a violent cop killer patient (David Arquette), and we have a recipe for a very, very twisted film. Oh, and did I mention this is in the midst of the pre-Y2K panic?

Bettis’s Mandy may be a drug dependent criminal (even a murderer, as she is occasionally known to “assist” a few donors along to their repose to speed things up), but she is smart and would be a great nurse, if… well… you know. Who wouldn’t make a great nurse? The ditzy, bubbly blond Regina. Regina makes a bad situation worse when she decides to try her hand at replacing that kidney herself. She’s stupid, amoral, hilarious, and utterly lacking in knowledge of anatomy—the tip of the iceberg in the movie’s ensemble of mayhem-inducing characters.

Actor-turned-writer-director Brea Grant has concocted a doozy of a black comedy in 12 Hour Shift, and it’s a treat in a world all too grim these days. Nothing is sacred in this film, and that’s just the way it should be. Dark humor works best when smartly done, and this is one smart film. It’s also got a look all its own. Matt Glass’s cinematography is brightly over-lit and dizzyingly disorienting. His use of wide-angle lenses makes the rooms seem impossibly yawning, and the object in them distort and become nightmarish in their own right. And not one to rest on his photography laurels alone, Glass also contributes an off-kilter and careening musical score that suits everything to a “T.”

Angela Bettis has never been better. Her character should be loathsome, but Bettis gives her tons of charisma despite everything she does. She ably carries this film from its opening scene to its throw-down, knock-about end. Nikea Gamby-Turner is rock solid as well, giving her Karen as great sass and wry wit. Arquette, who also produced, quickly makes you forget Scream’s goody Deputy Dewey with his portrayal of the brutal Jefferson. The rest of the cast–including Mad Men’s Kit Williamson, Julianne Dowler, Dusty Warren, and Mick Foley–each tackle their roles with aplomb and twisted glee. But it’s Chloe Farnworth’s Regina who almost threatens to steal the show. She Margot Robbie’s Harley Quinn, if Quinn was as smart as a bag of rocks. Inept, reprehensibly sociopathic, and brought to glorious life by Farnsworth.

12 Hour Shift is a blast. A bloody, ridiculous, f-ed up blast.