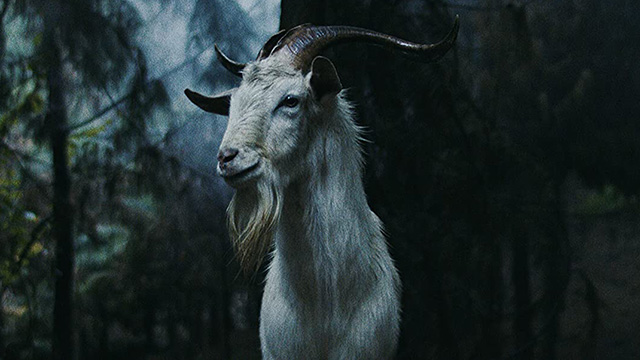 "Luz: The Flower of Evil"
review by Diablo Joe 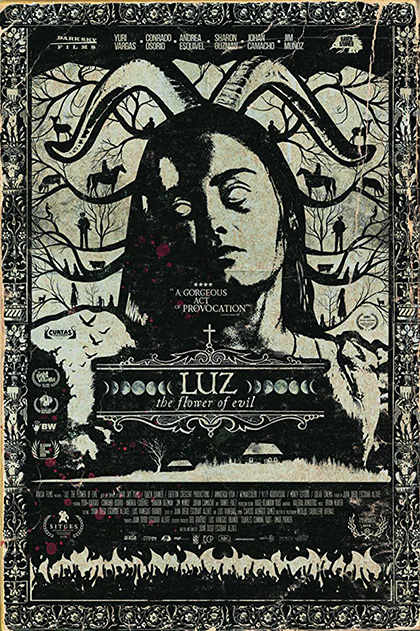 Pastoral horror has experienced a renaissance in the past few years. The Witch and Midsommer are probably the most well-known examples. Juan Diego Escobar Alzate's Luz: The Flower of Evil could be considered the latest, but rather than purely pagan themes, Alzate makes this very much a mediation on Messianic beliefs as well. And he drapes it in some of the most beautiful and often subtly surreal scenery recently put to film.

It is an unspecified time, but the amenities and clothing suggest the old West. Laila, Uma, and Zion are three young girls living in the hills, wards of the stern, austere El Señor (The Lord), self-styled prophetic preacher to the people of the local village. They've been told these three young women are angels. Of the three, only Laila, the eldest, is El Señor's child. Her mother is the enigmatic Luz, a figure spoken of with reverence but never seen. For Luz had passed years before and was buried beneath a fallow tree with El Señor's promise that she would bring it to bloom. It is one of the many, many prophecies that El Señor has made to the community and to girls in his charge. Two events begin to tip things away from El Señor's favor.

First is the strange item Laila has found in the forest. A Panasonic portable cassette deck. El Señor tells his child that it is an instrument of the devil. That the music it plays (Mozart's Flute Concerto) is one of his tricks. Laila takes the news of this to the other two girls, who are fascinated with the mysterious, forbidden topic that a devil exists.

The second is the arrival of a young boy to the homestead. El Señor has decided that this boy is the Messiah and has renamed him "Jesus." When the boy's mother protests, El Señor brutally rapes her, a horror the girls witness. As for Jesus himself, El Señor keeps him chained in the yard, out in the elements. The Messiah, he says, cannot be harmed by cold or the harsh exposure to nature. And there the boy sits day after day, mute, almost catatonic, eating nothing. He is the fifth boy to whom El Señor has made this hallowed claim.

Slowly, the townsfolk begin to sour on El Señor's feverish proclamations and zealotry. Their world has not borne the prosperity he has promised. They have not seen his prophecies come true. And they begin to realize that his "angels" are just girls; girls who are becoming women, as some of the community's younger men are deciding. More and more, the girls, too, begin to doubt the truths of their upbringing. And this portends some very dark times ahead for them, the villagers, and El Señor.

Alzate never stoops to simple one-to-one allegory here. His thematic explorations are far more complex, involving aspects of patriarchy, womanhood, and more. Many elements are left up to the viewer to interpret. Is there a devil at work? It there a force of good, and if so, is it Christ-like or more grounded? And what of the anachronism of the tape deck?

The whole film has an air of dark fable about it. The skies are always hallucinatorily unreal–the daylight eerily vibrant blue, the nights dense with twinkling stars. It's a film deep with magical symbolism and imagery. I kept thinking of the films of Alzate's fellow South American filmmaker Alexandro Jodorowsky, and his similar obsession with young Messiah (though this is without Jodo's grotesquely violent excess or massive ego). Alate's touch is a gentler, more lyric one, but not without its own savage horror.

In his hands, Luz is a very special film.

This devil of a reviewer gives Luz: The Flower of Evil 4.0 out of 5 Imps