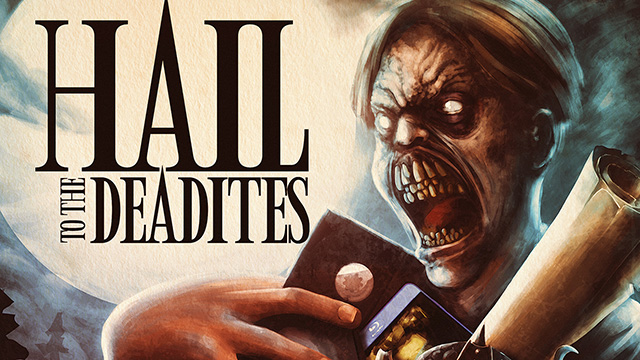 "Hail to the Deadites"
review by Diablo Joe 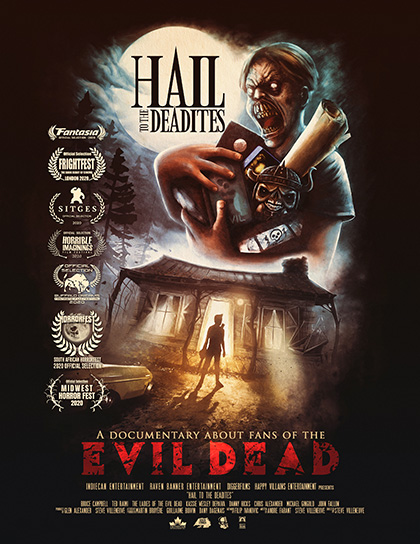 Hail to the Deadites
www.facebook.com/HailToTheDeadites

Documentaries about fandom are nothing new. Probably the first notable one was Roger Nygard's 1997's "Trekkies," and many more have followed, including "Fanboy Confessional," "Never Surrender: A Galaxy Quest Documentary," "The People vs. George Lucas," and others. While fandom has evolved from something enthusiastic people of passion swapping fanzines, pen palling one another, and meeting in a block of 3-4 rooms at the Ramada Inn to the multi-billion dollar driving force behind almost all popular media, the fans, at their real core, may not have changed all that much. At their heart, they are people insanely passionate about what they love. And we all know that THE most insane and THE most devoted fans are horror fans. And one of the most insane horror franchises has got to be "The Evil Dead."

Director Steve Villeneuve is crazy for Evil Dead, but he may be crazy for his Deadite family even more. A love letter to Evil Dead fans, "Hail to the Deadites" shows you why they are indeed a wonderful, if twistedly possessed, bunch.

Much like the three Evil Dead films, which range from terrifying to the outright ridiculous, the Deadites are an equally varied bunch. We meet superfans Bri and Elise, and Deadite couple Kevin and Robyn. There's Ash Williams doppelganger Adam, and the similarly uncanny cosplayer Denis. Deadites from abroad, Martin, Steve, John, Michael, and Emanuele prove that the tendrils of evil know no borders. They're all a terrific, enthusiastic bunch. Any of us can identify with their enthusiasm and the stories they tell about why they love these movies. Some of them may have leveraged every financial trick they have to afford their Evil Dead habit, but it's a joyous, positive addiction.

We follow this bunch from their memorabilia, poster, action figure, and screen-used prop-filled homes to several Evil Dead events and conventions. We meet effects guru and Evil Dead artist Tom Sullivan– as much a Deadite as anyone. He travels from event to event with a literal museum of Evil Dead artifacts. Sullivan knows the fans by name and genuinely cares about them, even as far as directing and propping out Kevin's marriage proposal to Robyn–Kandarian Dagger and all! If you ever ripped a living, beating heart from the Evil Dead universe, it could very well belong to Tom Sullivan.

The fan's affection is reciprocated as we meet much of the trilogy's cast, including Ellen Sandweiss, Theresa Tilly, and Kassie Wesley DePaiva. Even actors Rick Domeier and Dan Hicks, attending their first events ever, are sucked into the passion and love the fans have.

Of course, The Evil Dead wouldn't be anything if it wasn't for Ashley Williams himself: Bruce Campbell. The trademark smirks and sass are in full evidence as he recounts encounters with fans–even showing his own fannish side with gushing adoration for William Shatner. A few comments he makes might mistakenly indicate Campbell shares his hero's love/hate relationship with his fanbase. But this is countered by anecdotes and encounters that show that he understands the fans in a way our dear Captain never really has (and indeed, Campbell has always been in on his own joke!). Campbell is Ash, and we love him, smart-ass that he is.

And we love these fans. That's what this film is all about. Not the Evil Dead. Not Bruce Campbell. It's about THE FANS. These could all be people we know. Indeed, they are.

And they are us.