Review of "Psycho Ape” by The Headless Critic 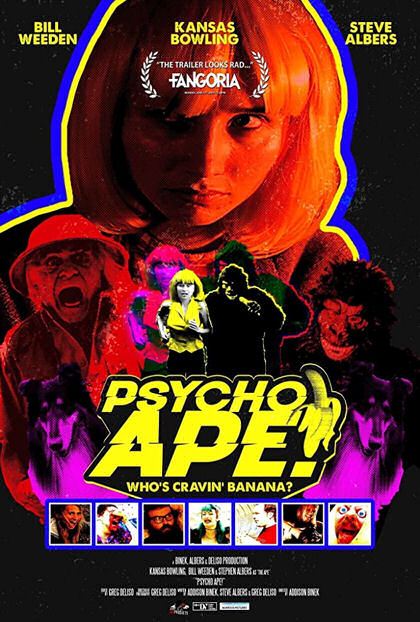 You’ve seen Kong, the remake, the reboot, the reshoot, the prequel and the squeakquel. You probably didn’t see Mighty Joe Young in 1949 or 1999 but you saw every Planet of the Apes movie a dozen times. Prepare yourself for the dumbest, cheapest ape of them all, that is still better than half of the Kong movies and at least one of the Planet of the Apes.

Teenage Nancy Banana (Kansas Bowling) is absolutely bananas about apes. In fact she loves them a little too much if you ask her friends. Something they remind Nancy of any time she relentlessly brings apes up amid all conversations. Nancy has assured everyone that there’s nothing sexual at all about her burning, passionate, attraction towards the big black creatures but her friends think Nancy is psycho about apes. A Psycho Ape (Stephen Albers) just so happens to have escaped a local Detroit Zoo and is on a killing spree. The police? What do you think the police are going to do about a psycho killer ape running wild? They’re used to catching and murdering humans not apes. Dr. ZOOmis (Bill Weeden) is hot on the trail of the escaped killer ape. On the night of Nancy’s slumber party with her teenage friends when most girls are painting their nails, taking boyfriend quizzes from the teen magazines and watching the latest Christian Slater movie, the Psycho Ape crashes their slumber party without an invitation but with plenty of killer bananas. They were just teenage girls trying to have a teenage party and Psycho Ape is ruining it. Warning, many bananas were harmed in the making of this film.

The Ape… For centuries man has been fascinated by our wild kin. Are we the winners of a cosmic marathon? Or, are we the devolved monkey slime of our ape ancestors? This movie does not have the answers. But, it does have Bill Weeden! Shot on MiniDV which went obsolete just after the 1990’s as the digital age came in, Psycho Ape starts out in 1995 with one of the most pleasing and attention grabbing openings I’ve seen in a movie in a while. It quickly sets the tone for what you’re about to watch. Through a montage of banana based murder that feels like a quick clip anthology of dumb adult humor similar to 1977’s Kentucky Fried Movie, Dr. ZOOmis journey’s through the decades chasing Pscyho Ape from 1995 Detroit to 2020 New York City, bringing the MiniDV and pop culture references from the 1990’s with them. A film full of homages to classics like Halloween, A Nightmare on Elm Street, Die Hard and Forrest Gump, Psycho Ape gives just as many references to the forgotten Mighty Joe Young as it does the iconic King Kong. This Addison Binek, Steve Albers, Greg DeLiso production fits right in as a Clerks era film from the 1990’s or possibly even an Apesploitation movie from the 1970’s. After all Bill Weeden is timeless.

“This psycho ape has made his escape and begun to murder and pillage and rape. Add bloody carnage this creature adroit, going to leave corpses all over Detroit. Jeffrey Dahmer’s got nothing on him, we gotta catch him fast or the future is grim.” – Dr. ZOOmis

The creative minds behind this film may have been limited on budget and reduced to use CGI blood and smoke for a laugh but they’re also the creative minds who’ll bring you an ape eating a cake and a killer ape cooking a banana in a skillet. I’m sure you won’t see those oddly pleasing scenes anywhere else. Low Budget News Anchor Geltroy Shithouse (Grover McCants) is the best character name I’ve see all year. Someone needs to give Grover McCants voice acting work. He reminds me a lot of a younger James Earl Jones and with a voice like that he fits perfectly as a new anchor or man of authority. Kansas Bowling plays a mindlessly happy ape lover who can go-go dance impressively well but still may not have the most impressive dance moves in the movie! Scenes like the debate between Team Toy Story (Brea Kaufman) and Ratatouille Superfan (Kearsyn Joniper) and the Central Park conversation between Fransica (Dylan Greenberg) and Petunia Filler (Amanda Flowers) are very natural, seemingly unscripted dialogue that prominent directors like Quentin Tarantino and all those who copy him refine to perfection in their blockbuster films. The dialogue here is authentic, even breaking the 4th wall. That realism clashes with what is otherwise an over-the-top film but always ultimately ends in an even more pleasing banana-ing of the conversational characters. The scene with the Filler sisters in particular and how it spans the entire film reminds me even more of a movie once fried up in Kentucky.

An enjoyable, attention grabbing watch from start to finish which is an achievement most films lack. This is run and gun filmmaking that is more Troma than most modern day Troma movies. With the indy filmmakers involved that were already mentioned and a few others doing cameos like Adrian Esposito and Cody Clark who can take a banana with the best of them, I would love to see what this group could do collaboratively in a true anthology of short skits. Although I’m not very familiar with director Addison Binek’s work I can definitely see the influence of writer, producer and editor Greg DeLiso who directed a similarly low budget film I was a big fan of Hectic Knife. Psycho Ape’s juvenile sense of humor will not be for everyone but if it’s not your sense of humor then you probably don’t have one. Most importantly out of anything else in the film, in the end the right primate gets the girl. If you want to see the film star Kansas Bowling in a more intimate scene than the film provides, stick around for some post credit action!