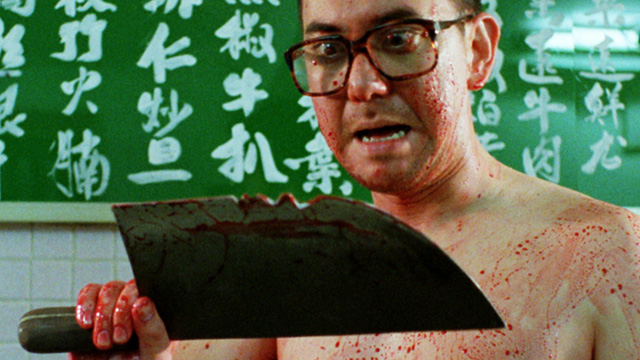 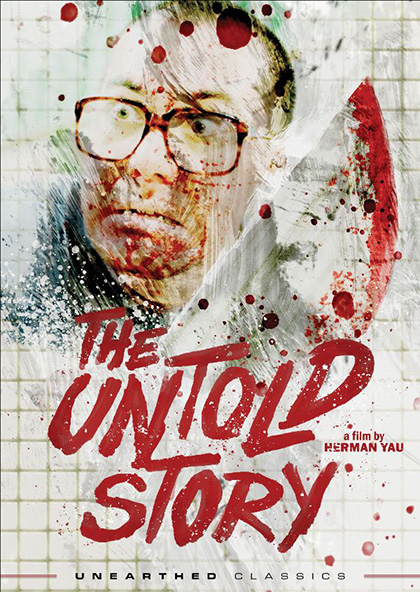 In 1985, in Macau, just off mainland China, gambler Huang Zhiheng brutally murdered restaurant owner Zheng Lin and nine members of his family over a debt dispute in what would become famed as the "Eight Immortals Restaurant Murders."

1993's The Untold Story is the fictionalized retelling of that horrific incident. It spares little in the way of bloody, gory details of those murders, tacking on some additional grisly killings for good measure. Arguably the most infamous Hong Kong "Category III" motion picture, it certainly stakes its claim with its unflinching scenes of feverish brutality.

Wong Chi-hang is the new owner of the Eight Immortals Restaurant, a popular Macau eatery loved by the locals, particularly for its char sui bao pork buns. Patrons query Wong on the whereabouts of previous owner Cheng. Wong, an awkward, twitchy fellow with the air of a bespectacled nebbish, proves to be anything but, and his gruff, aggressive demeanor quickly puts an end to any questions. If that isn't enough to quell inquiring minds, Wong's skill with a cleaver proves more than sufficient to the task. Wong covers his tracks in Sweeny Todd-style, grinding his victims into the Eight Immortal's popular BBQ "pork" offering.

Meanwhile, when a sack of mismatched human limbs washes ashore, Macau's detectives begin an investigation that, along with Cheng's inquiring relatives, bring them round to Wong. When Wong attempts to flee to the mainland, they apprehend him as a suspect. Wong proves a formidable, challenging prisoner, and the authorities spare nothing in trying to extract a confession from him.

Like many Hong Kong films, an odd mix of clownish humor is tossed in with the grotesque. Our investigating detectives are three bumbling, lazy male cops and their eternally harassed tomboy of a female partner. Their investigation is kept on track by their boss, Officer Lee, a playboy of a figure with a sexy (working) girl on his arm no matter where he is. When we're with this bunch, the film is often silly and slapstick and even lighthearted.

Contrasting this is the brutality of our murderer (played by Hard Boiled/Infernal Affairs actor Anthony Wong). Wong the Character is terrifying. He is smart (though careless), ruthless, and desperate, and Wong the Actor holds nothing back in his portrayal. The treatment he suffers at the hands of his captors and fellow inmates would be enough that almost anyone else would be deserving of some audience sympathy. Wong insures that never happens. Wong's performance is feverish, wild-eyed, utterly realistic, and unrelentingly frightening. When he is onscreen, we are on edge.

The Untold Story's Category III rating and legendary status is well-earned. Wong's victims aren't just dispatched; they are killed with such viciousness that these scenes will stick with even the most jaded viewer. When one murder takes a savage sexual turn, you may think the film has reached its apex. You will be proven very wrong.

If nothing else, see this film for Anthony Wong's astounding and fearless performance. Much like Michael Rooker in Henry, Portrait of a Serial Killer, the actor gives his role all it deserves. Unlike Henry, there is nothing even remotely charismatic about Wong Chi-hang. He is a thoroughly nasty piece of work.

This reviewer gives The Untold Story 5 out of 5 imps