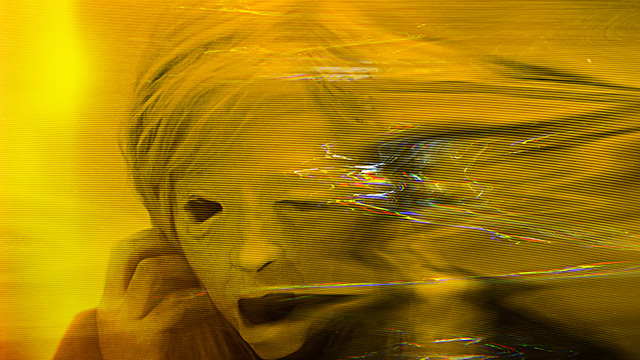 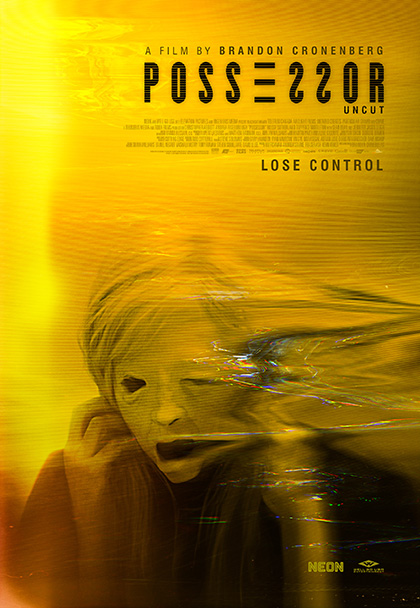 It's a lavish event in the loveliest of settings. Gilt walls, expensive décor and lighting, and beautiful women ready to attend to guests every need. One of the attendees, a man of obvious stature and wealth, leans casually at one of the bars, chatting. A hostess approaches, and, seconds later, the man is dead, the victim of a savage attack.

So begins Brandon Cronenberg's Possessor Uncut, a cool, intense, and densely layered thriller. Possessor (its original title, one guesses the "Uncut" became the defacto version since a theatrical release for a film of this level is difficult in these times) posits a world in which minds can be technologically transferred into the unsuspecting. These Hosts are now at the mercy of possessors know as Agents, highly specialized assassins. And while the Host's hand may have wielded the weapon, it is Agent Tasya Vos (Andrea Riseborough) who drove it home.

Vos is brought back out upon the physical death of her Host, but it is far from a clean break. Her supervisor, Girder (the always amazing Jennifer Jason Leigh), coaches her through a series of tests to evaluate Vos's ability to maintain her own cognizance. It is immediately evident that this is not a profession without a price. It has cost Vos her home life and might be playing with the fringes of her basic humanity.

Vos's next job is perhaps of the most complex and potentially impactful yet. Her target is John Parse, head of a major tech firm specializing in uber-invasive data mining. Unsettled when an ad for rice cookers pops up on your social media just moments after texting someone for their opinion of the one they just purchased? Parse's company's abilities give you an idea of just how casually invasive tech could easily become. Vos is tasked with assuming the Host body of Colin Tate (Christopher Abbott), Parse's future son-in-law. Differing from previous jobs in its complexity, length, the extent of immersion, as well as Tate's different sex, it is a mission that will tax Vos's ability to maintain her own identity and the trappings of her personal world.

Cronenberg is, of course, the son of famed filmmaker David Cronenberg, and one immediately begins to draw comparisons between this film and the masterfully pioneering body-horror cinema of his father. And the similarities are there. The themes of technology, identity, and consciousness (Videodrome). The use of that tech as a specialized weapon (eXistenz and Scanners). The unassuming, nondescript master assassin (A History of Violence). And like his father, Cronenberg refuses to shy away from showing us incredibly brutal violence (and the violence in Possessor is horrifying sudden, and savage). But where Cronenberg fils differs from Cronenberg père is in his style.

One never accuses David Cronenberg of being subtle. Possessor basks in his's son's confident use of quiet, evocative moments. His father's films exhibit a cold, crisp, and slightly at-arms-length artifice, often utilizing sets for even the most straightforward locations. Brandon Cronenberg infuses Possessor with lush, moody shallow-focus cinematography and expansive, on-location settings. The production design is wholly believable, and his compositions sometimes reveal the broader influence of filmmakers such as Stanley Kubrick. The film looks fantastic.

But what makes Possessor truly tick are its actors. Riseborough's Vos is highly intelligent, dedicated to her job, but visibly fragile. She brings a weight to the character's emotional and mental state that hangs, critically, over the entire film. Leigh is one of our finest actors and can infuse the simplest of delivery with volumes of subtext. Sean Bean's Parse is repugnant, smug, and cruel. But it is Abbott who surprises here. As Tate, he is granted brief screen time. It's Vos/Tate that we know him for the rest, and he carries that dichotomy with great skill. A lesser actor could have easily played it improperly. He and Cronenberg are so confident and able in their storytelling that you think of him continuously as Vos, without the actor ever resorting to obvious "tells."

While undoubtedly his father's son, Brandon Cronenberg makes this textured, cerebral film a vision wholly his own.