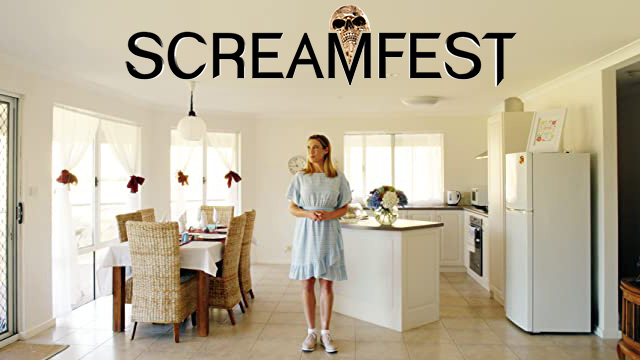 "An Ideal Host"
review by Diablo Joe for Screamfest 2020
screamfestla.com 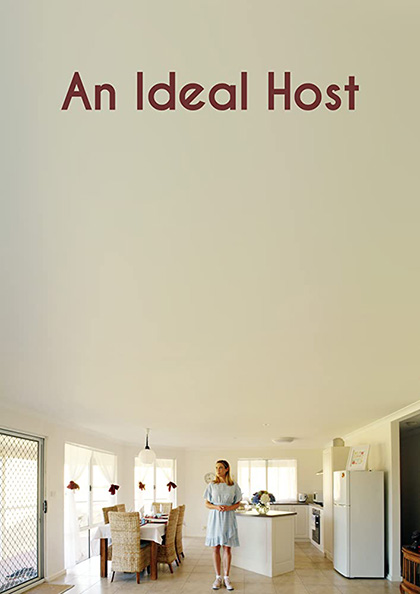 Every once and a while, a debut film comes around that boggles the senses and thrills horror film lovers at the possibilities to come. An Ideal Host is that kind of film, and as the first feature for both director Robert Woods and writer Tyler Jacob Jones, it is a marvel of creativity, ingenuity, and confidence.

Liz and Jackson are a couple, recently returned to their childhood village in the English countryside. Jackson plans to surprise Liz with a marriage proposal. Perfectionist Liz aims to make that surprise a part of a flawlessly hosted dinner party (yes, you read that right) for their old hometown friends. Things start to derail when Liz's train wreck ex-bestie decides to invite herself to the event. From there, things go from bad to worse, to–well, the less you know in advance, the better.

It IS supposed to be a surprise, right?

Starting with a scream (literally) and never letting up on a perfect mix of humor, savagely witty dialog, insanely bonkers music, great performances, and breakneck, antic pacing, An Ideal Host is simply a delight from start to finish. It's an incredible team effort in which all of the pieces drop into perfect place (which certainly cannot be said of Liz and Jackson's evening). In addition to director, Woods wears a multitude of other production hats. As he's also producer (with Jones), cinematographer, editor, visual effects artist, and even composer, and you might want to pin much of the film's success upon his efforts. But to do so, you'd ignore Jones's clever, well-structured script with its smart wordplay and creative, distinctly original characters. It's the pitch-perfect vehicle for a fine ensemble of fresh acting newcomers.

Evan Williams, as Jackson, is square-jawed and charming. By all appearances, a perfect husband-to-be. Just returning from a trip to Bali, Mara (Mary Soudi) is excited at the news that the strapping, earthy, bearded Brett will be attending (oh, and did we mention Mara just returned from a trip Bali?). Brett (St John Cowcher) is the farm-next-field-over-neighbor friend who never left home. The rest of the dinner guests are rounded out by the arrival Kyle (Daniel Buckle), both Jackson's childhood friend but also the butt of some genuinely nasty childhood taunts, who has brought his new boyfriend Jon, an eager, ponytailed fellow who somehow can both constantly overshare and still remain a surprise. And of course, there's Naomi Brockwell's Daisy, a brash, caustic, wine and ID-driven creature, who left town ages ago and whose return is the first of many monkey-wrenches tossed into the evening's works. All of these actors take these rolls and bring them to vibrant, hilarious life.

But it is Nadia Collins as Liz who is the real treat. Wide-eyed and high strung, all Liz wants is the perfect evening, perfectly as planned, with herself as the perfect, ideal host. Over the course of the film, Liz is forced to adapt and make sacrifices as she realizes that, rather than be the host the party wants, she needs to be the one the party deserves.

For film lovers who enjoy both early Peter Jackson and the films of Edgar Wright, this film will quickly become a favorite. As such a solid and strong debut work, it deserves to be seen, enjoyed, and championed by as large an audience as possible, to ensure that Woods, Jones, and Company are heard from again soon. An Ideal Host is cheeky, twisted, and thrilling horror fun.