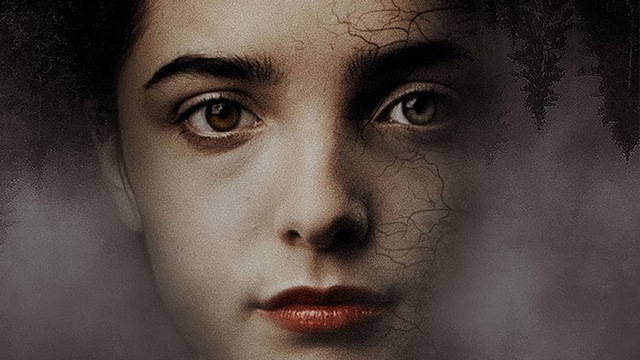 "The Curse of Audrey Earnshaw"
review by Diablo Joe 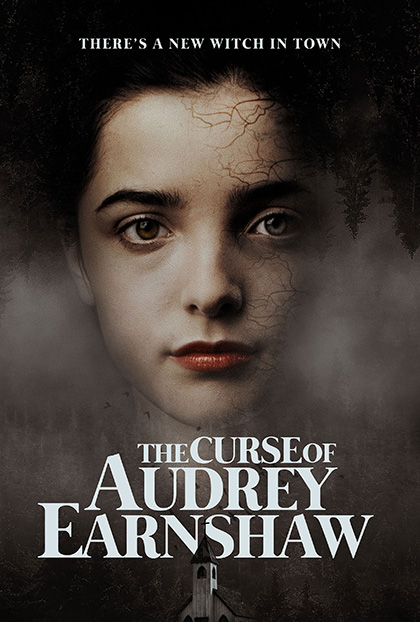 The Curse of Audrey Earnshaw
facebook.com/thecurseofaudreyearnshaw

In the late 19th Century, an Irish religious sect fled Europe and found themselves in the New World. Much like the Amish and Mennonite before them, this group eschewed the technological advances around them, opting instead for "the old ways." Living for generations, set apart from the progress of the modern world. But this idyllic, simple existence is met with bleak tragedy following a 1956 eclipse. The community's crops began to fall fallow, their livestock became fraught with disease and mutation, and their hope and faith began to wither like the vines they had planted.

Sole amongst them exempt from this blight was a woman named Agatha Earnshaw (A Dark Song's Catherine Walker), an outsider amongst outsiders. For Agatha's bounty never ceased nor faltered, and soon rumors abounded that Agatha was a heretic… or worse. Indeed, during this eclipse, Agatha had given birth to a girl she named Audrey (luminous newcomer Jessica Reynolds), a child she kept secret, for reasons known only to her and a small, clandestine group of women practiced in even older ways, for 17 years. On the centennial of the group's arrival to these shores, her daughter Audrey's secret is about to be revealed and a dark and pestilent malevolence even Agatha could have predicted. This is, in so many ways, The Curse of Audrey Earnshaw.

Writer/Director Robert Thomas Lee has created a believable and realistically flawed community of cloistered, God-fearing men and women. Unlike M. Night Shyamalan's The Village's ridiculousness, these simple, humble, penitent folk are duly aware of the world in which they coexist. It is 1973, after all. Small aircraft fly above their fields, and it is hinted that the men sometimes work within the modern community (much as the Amish do), and they have full knowledge of both the modern benefits and the modern vices they eschew. They have still held fast to their faith and belief over nearly two decades, despite rotten crops and freakish animal births. But this devotion begins to unravel on the day that Bridget (Hannah Emily Anderson, of Jigsaw) and Jared Abrahamson's Colm Dwyer bury their young boy—the human victim of the ever-deepening sepsis plaguing their village.

When Agatha tries to cross through town with Audrey hidden in a crate amongst vegetables and meats intended for the sisterhood she calls The Others, she is challenged by the distraught Colm, who accuses her of witchery for her singular prosperity. He strikes her, and, as Audrey witnesses this, it darkens both her view of her mother and this community's people. This contempt is worsened by the ritual with The Others that soon follows.

Unlike films like The Witch (which I feel it sometimes wishes to emulate) and Hereditary, The Curse of Audrey Earnshaw makes it very clear early in the movie that "Here Be Wytches." And it is soon made apparent that Audrey is something far beyond the comprehension of both the townsfolk and her mother. What follows is dark, insidious, and evil. As Audrey's presence becomes known to the townsfolk, her influence permeates and perverts, driving all who encounter her down dark and horrible paths. She is indeed the manifestation of the infections plaguing the village, and no one is spared.

The Curse of Audrey Earnshaw is beautifully shot, and a mood of darkness and bleak pallor envelopes the picture. The entire cast is positively spectacular. Each actor brings emotional weight and weariness to their roles, and we feel this village's despair and pain through their performances. As alluded earlier, Reynold's Audrey is captivatingly beautiful and seductive—both in vision and presence. Embodying a young lady both becoming aware of her womanhood and something far more powerful, this actress exhibits confidence and strength, especially when paired with the powerhouse that is Catherine Walker. Anyone who has seen A Dark Song (essentially a harrowing showcase for her talent alongside the always fantastic Steve Oram) knows what a potent force she can be, and this film is no exception.

But, tragically for the story, it is Agatha that is the films undoing. While the actor brings to bear all her talents in service of the roll, Agatha fails to rise to the story's needs. It's a great character, but a great character for a different film. Agatha is stoic, smart, proud, and capable. Her love for her daughter is absolute. But her involvement with The Others, especially as the full secret of Audrey's purpose and ability reveals itself, becomes more and more puzzling as the film goes on. Agatha is a loner and a survivor, but one without malice. As the film's evil becomes more pervasive and influential, the question arises as to why Agatha is involved with any of this.

The Curse of Audrey Earnshaw is an engaging and enveloping depiction of faith at all costs, on both sides of the moral coin. But it is undone by a brilliant main character too noble for a film dependent upon moral flaws.